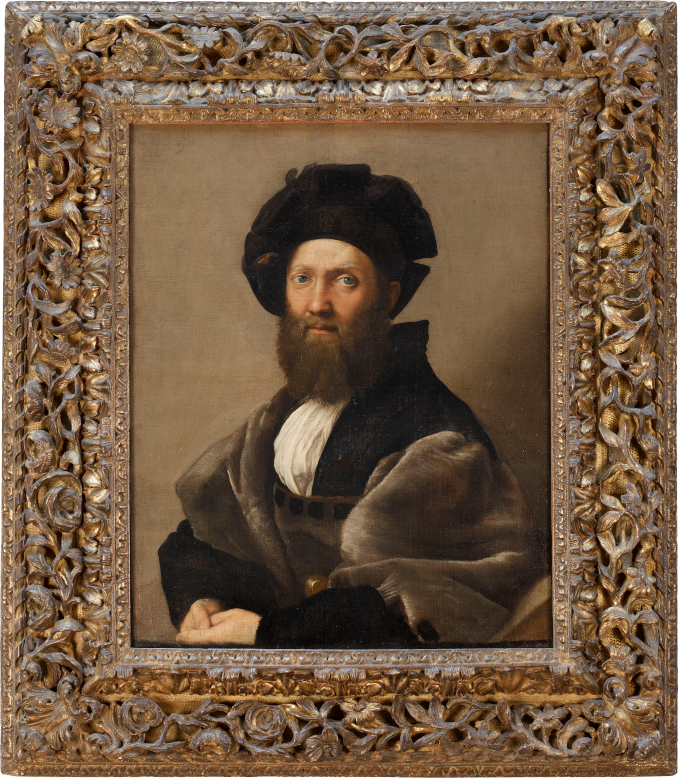 April 6, 2020 markes a 500 year anniversary of passing of one the most beloved artists. A huge Raphael exhibition at the Scuderia del Quirinale in Rome could only open in March for few days before the whole of Italy went on quarantine. Now these masterpieces are hanging on the walls in completely empty halls.

It was designed to be a once-in-a-lifetime loan exhibition at a scale of the Louvre’s show of da Vinci last year. It was meant as a celebration of one of the greatest painters in art history, a man who spent most of his creative years in Rome, and whose frescoes and oils draw excited crowds in any place they can be viewed. It was to be an exhibition to commemorate 500 years of Raphael’s passing, assembling his masterpieces at an exposition hall called Scuderia del Quirinale located in one of the presidential palaces in Rome. Like so many thousands of art lovers, I still have tickets to this exhibition, now meaningless bits of paper, while the paintings, tapestries, documents and sculptures are facing empty and silent rooms of the Scuderia. The exhibition had to close after opening for a few days in early March, succumbing to the inexorable progress of the virus across the globe. Italy, the heart of the world of fine art, is on a lockdown. I’m trying to imagine what we would have seen. 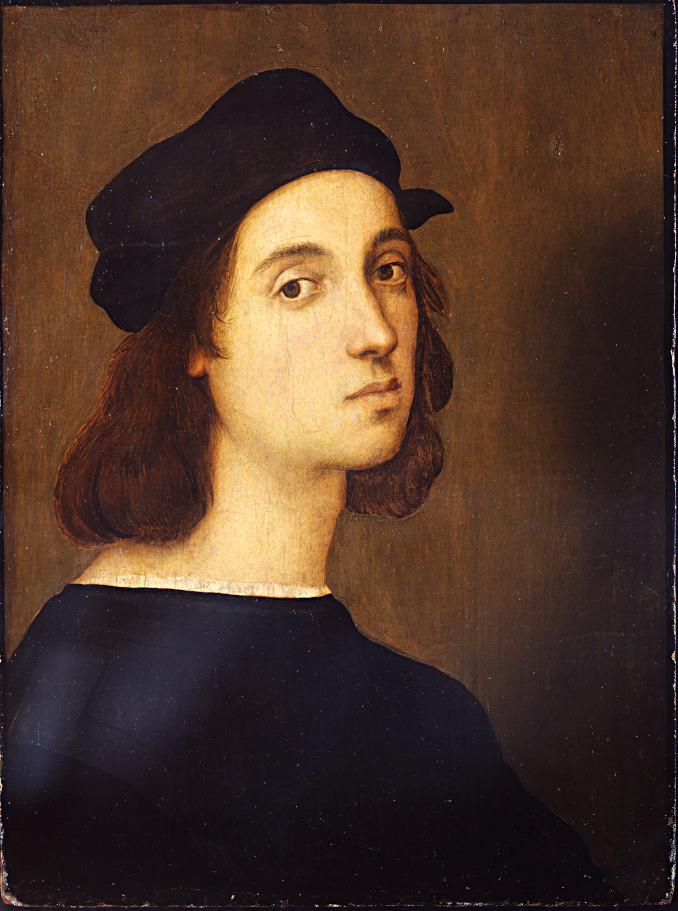 The exhibition was designed to flashback from the date of Raphael’s untimely passing due to an unspecified fever at the age 37, on April 6, 1520. By then he was Rome’s famous citizen who could name his own price for a painting or a tapestry cartoon, a favorite artist of two popes for whom he decorated Vatican rooms with his School of Athens and The Deliverance of St. Peter from Prison, and a successor of Bramante in designing the St. Peter’s Basilica. In his last, most prolific eleven years of his life that he spent in Rome, Raphael was not only painting and drawing commissioned portraits and religious scenes, but he also oversaw the design and construction of St. Peter’s Basilica and Chigi Chapel, as well as conducted serious and systematic archeological research of the city. There is a reason why a term “Renaissance Man” was coined.

To make this point, the exhibition had a whole section devoted to Raphael’s architectural designs, from the St. Peters Basilica, to the Villa Madama, and his crowning achievement of the Chigi chapel at the Roman Basilica of Santa Maria del Popolo. The artist’s architectural and archeological endeavors were highlighted through multimedia installations, such as a reconstruction of a map of ancient Rome and a 3D rendering of the facade of the lost Palazzo Branconio. While this cannot be experienced without visiting, Raphael’s paintings that have been admired for centuries are easier to recall. 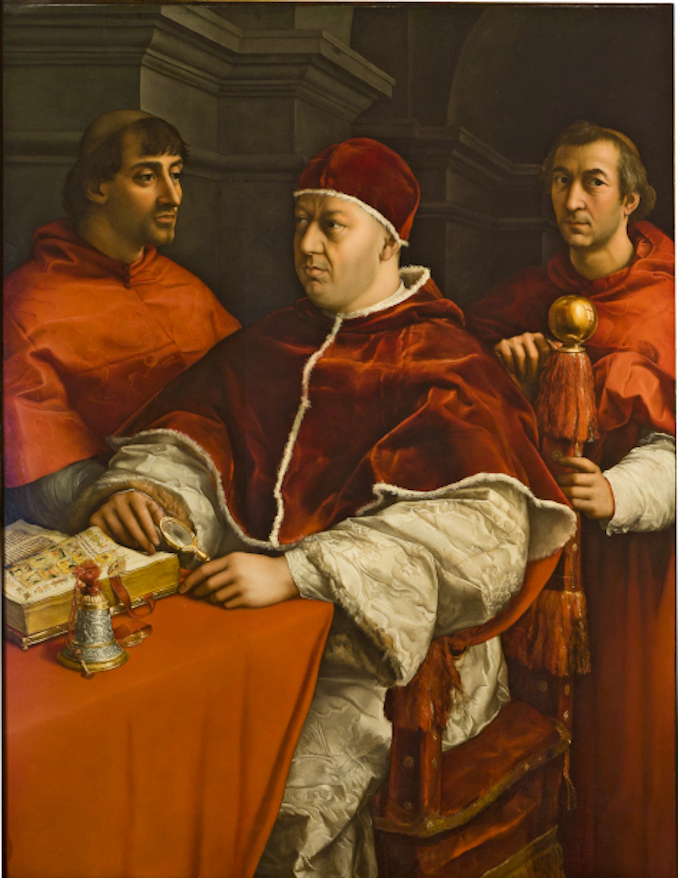 When some time in 1508 the elderly architect Donato Bramante, busy with construction of St. Peter’s Basilica, recommended his fellow Umbrian countryman Raphael to the pope Julius II as a new decorator of the Vatican apartments, a new chapter started for both the papal decorative ambitions and the artistic path of a young artist. Rome and papal patrons gave Raphael a scene to expand and to present his artistic talents. Unlike Michelangelo who chafed under the papal orders, this artist did not seem to bite the hand that fed him. He delighted his Vatican bosses with amazing frescoes and head-spinning ceilings, and when he painted the Pope Leo X, his mastery of rendering the textures and fabrics made Vasari gush: “the velvet with its pile, the damask which the Pope wears, rustling and shiny, the fur linings soft and lively and the golds and silks so well imitated that they seem not paint but actual gold and silk.” This famous papal portrait has just been restored specially for the exhibition.

But Raphael was not only serving his ecclesiastic patrons. He had secular commissions and painted portraits for his friends and prominent acquaintances, such as Baldassare Castiglione, whose striking blue-eyed portrait also graces the exhibition. Raphael got along well with his friends and patrons, his workshop apprentices (towards the end of his life he employed almost fifty), and…he was also very fond of women. Though he never married (a strategic engagement to Cardinal Bibbiena’s niece never led to a wedding), he never lacked in female companionship, including a lover that inspired some of his most known portraiture. 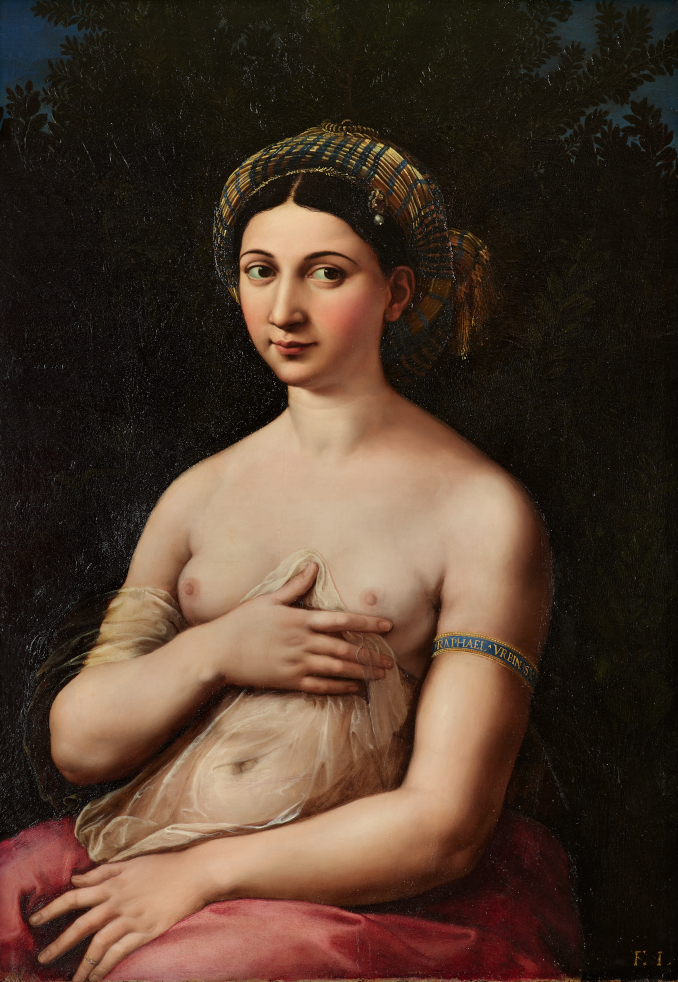 From his Roman period come two portraits dubbed later La Velata and La Fornarina, which are not only some of the most beautiful female faces painted by Raphael but also, possibly, portraying his own inamorata, Margherita Luti. La Fornarina bears an armband with Raphael’s name, and it is a small panel found in his personal belongings only after his death, never before listed in the artist’s meticulous records – surely a sign of his private relationship to this image and the lady he portrayed. La Fornarina is also pictured half-naked which is not exactly suitable for a formal family portrait in a reception hall but perfect for a private image of a lover. There is a panel of a similar woman, called simply Portrait of a Young Woman at Strasbourg Fine Arts Museum, that could also possibly portray the mysterious Margherita. Art historians are less sure if La Velata portrays the same woman because she has a different ear shape, and she wears a veil that would denote her as married, so her identity has not been confirmed. Regardless of the actual names and relationship to the artist, this is of less importance 500 years on than the mastery of painting in both pictures – the folds of their silks, the transparency of their gauze shawls, the delicacy of their features, and the sheer joy we experience looking at these Italian beauties. 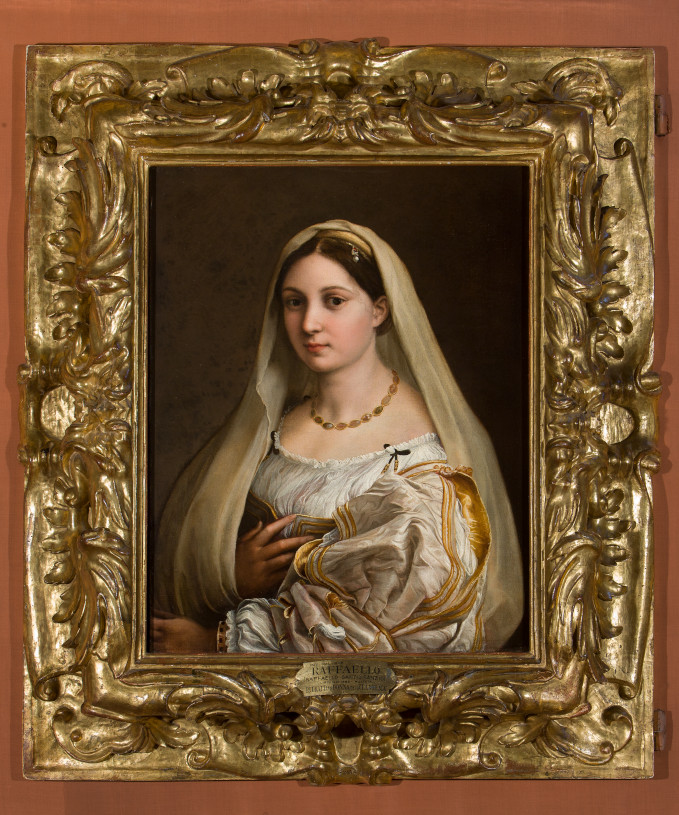 There cannot be a Raphael exhibition without his Madonnas – he painted them for churches, for his Vatican bosses, and as devotional pictures commissioned for private viewing. We are familiar with them from many museums in the world, and the Roman exhibition gathered some of the most beautiful and famous ones: Madonna della Rosa (from Prado), Madonna d’Alba (from Washington), Madonna del Divino Amore (from Capodimonte in Naples), Madonna Tempi (from Munich’s Alte Pinakothek), and Madonna del Granduca (from l’Uffizi). 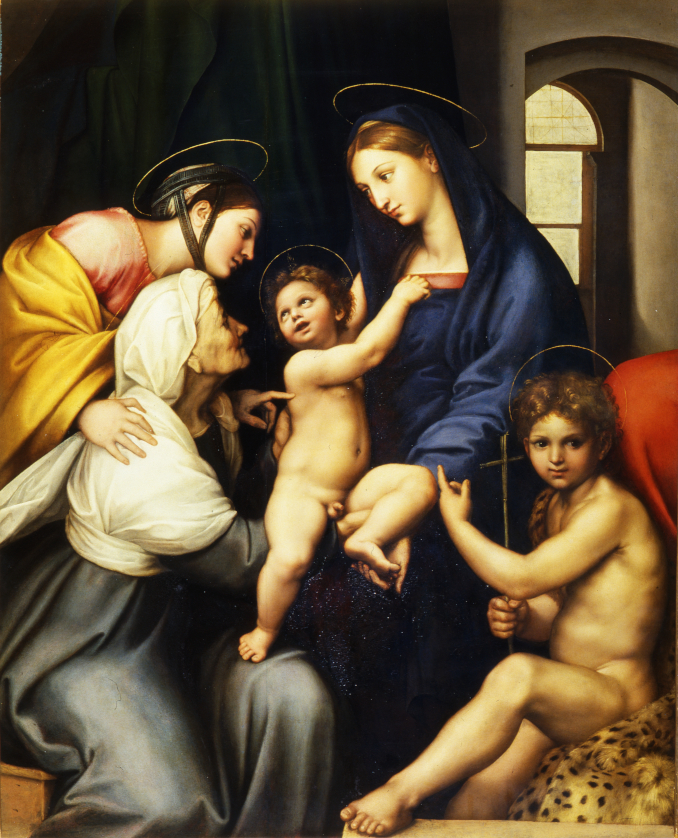 Madonna dell’Impannata was painted in his Roman period, and it shows off his synergistic ability to borrow from other masters and to synthesize into his own style. The boy John the Baptist sitting on the leopard skin could be lifted straight from a da Vinci painting, the characteristic, upward-pointing finger included. The wrinkled face of St. Anne could have been done by Dürer, and perhaps it foretells the craggy faces by Caravaggio and Ribeira. Much has been said about the fresh, natural look of Raphael’s Madonnas and female characters in his frescoes – the models were often local, perhaps servants or just women seen on the streets of Rome. What is most beautiful in this painting is the baby Jesus – a real joyful infant with baby’s kicking legs and a sweet face. Raphael’s infants are modeled on real babies, squirming and chubby-faced. It’s a long way from medieval imagery of a child-God aware of his future suffering from birth. Even such master as Jan van Eyck, as late as in 1435, would stick to the convention of baby Jesus looking like the old-faced homunculus: 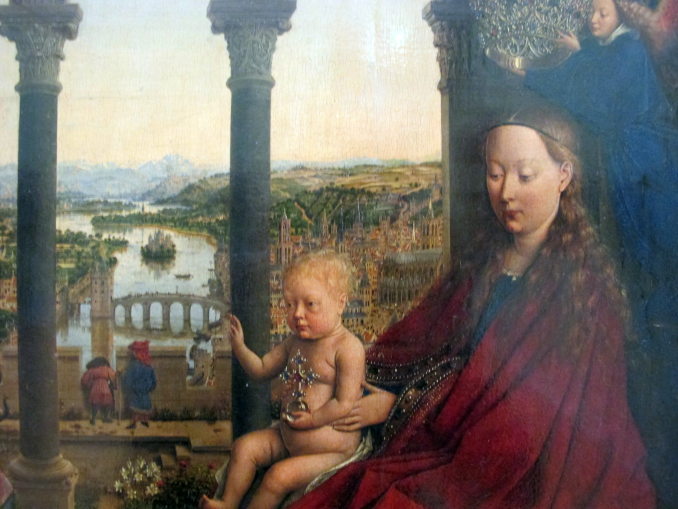 Raphael is one of the first who wholeheartedly decided to bring beauty and innocence to the devotional imagery of the infant Jesus. If you need comfort and a spiritual lift in the hour of need, Raphael’s serene Madonnas and charming infants have been coming to the rescue for centuries. 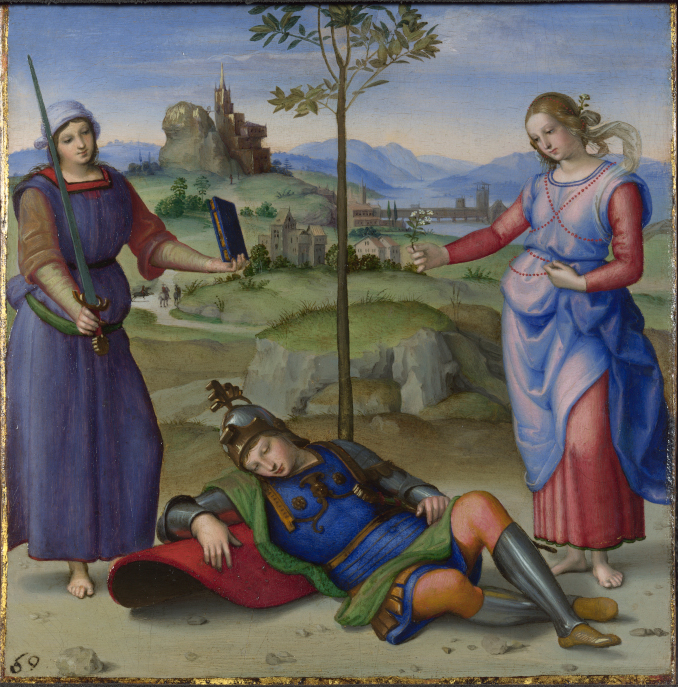 Raphael An Allegory (‘Vision of a Knight’) about 1504. © The National Gallery, London. Courtesy of Scuderie del Quirinale, Rome

While young Raphael was living in his native Umbria, his father was a painter serving at the ducal court but the talented youngster himself was not in the prince’s employ. That freed him from painting castle frescoes and decorating palace fêtes. Instead, he exercised his talent in some charming courtly pictures like the one called A Dream of Scipio or a Dream of a Knight. An illustration to a Latin epic about the Punic Wars, it is a painting that sits comfortably between a medieval composition and theme but already so far from it with its naturalistic, tri-dimentional figures and Raphael’s own sweetness of faces. This small, early panel foretells what we love about Raphael till this day. Da Vinci’s art is researched and mysterious, Michelangelo’s is grandiose and dramatic, Bronzino’s is formal and precise, and Pontormo’s is spiritual and modern. Raphael’s art feels romantic and sweet, but in the way that a spring morning feels sweet – not kitchy or overdone, just joyful.

This is what such a massive loan exhibition was to bring – an assembly of some of the best and perhaps even less-known of his achievements to underscore the breath of his talent and the joy we have had for the last 500 years when admiring his creations. The Roman exhibition has loaned 204 artworks and documents, including 120 by Raphael, from Italian museums such as L’Uffizi, Capodimonte in Naples and the Vatican, as well as the National Gallery in London, the Louvre, the Prado, National Galley in Washington and many others.

I cannot tell you to check this one out. As we watch Italy bravely coping with calamity and pray for a safe delivery of its citizens, all we can do is to spend a moment dreaming what an Italian exhibition could show us if they could open their doors.

If you want to donate to Italy in the moment of need, the Italian Food Bank Network accepts donations through this link.