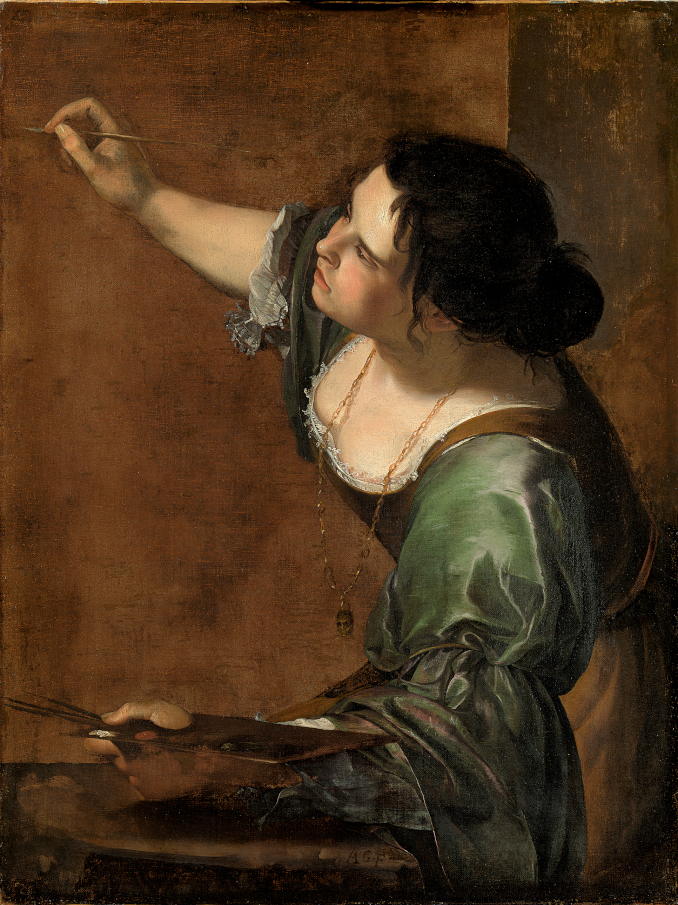 “…with me Your Illustrious Lordship will not lose and you will find the spirit of Caesar in the soul of a woman.”
Artemisia Gentileschi in a letter to her patron Antonio Ruffo in 1649, defending a price she quoted for painting “eight figures, two dogs, a landscape and water”

By Nina Heyn- Your Culture Scout

London National Gallery was about to open this month the UK’s first ever exhibition of paintings by Artemisia Gentileschi. The global quarantine has put end to it for now but we would still like to give you a virtual tour of this ambitious overview of life and art of the most famous Baroque female artist.

For the last few decades, Artemisia Gentileschi (1593-1653) has been a poster child for feminist-leaning art writers. In modern times, this 17th century painter has been more celebrated for what happened to her rather than her art. Artemisia started to learn painting as an only daughter of Orazio Gentileschi, an established painter in Rome. Her three brothers did not have an artistic talent but Artemisia exhibited gifts from an early age as evidenced by her first version Susanna and the Elders, painted when she was barely 17. A year later her life was thrown off its orderly course. She was raped by Agostino Tassi, a painter working with her father on some frescoes, and who was hired to teach her perspective drawing. Instead of trying to “bury her shame” in silence as it would be expected in those times, Artemisia and her father sued the painter in court. At the trial, the wheels of justice were rolling unevenly. Artemisia was tortured by having her fingers crushed, and she underwent a humiliating medical examination. Tassi was found guilty but, protected by the Pope, he was punished with a just a short exile into Roman suburbs. Eventually, Artemisia moved on – she became an established artist, married, bore four children. The trauma of her assault got channeled through her pictures. However, in art history Artemisia’s drama has become more prominent than her artistic achievements, at least as far as the general public goes. This is slowly starting to change, and Artemisia’s art is getting its professional due as one of the most interesting artists of her time. In fact, last November, one of her paintings of Lucretia sold in Paris for about $5 million. In terms of artistic recognition, Artemisia’s paintings are also getting star treatment. In December last year, when the Seattle Art Museum displayed one of her most famous paintings, the 1612 version of Judith Beheading Holofernes, during an exhibition of the Italian masterpieces loaned from Neapolitan Museo di Capodimonte, this canvas was the highlight of the show. 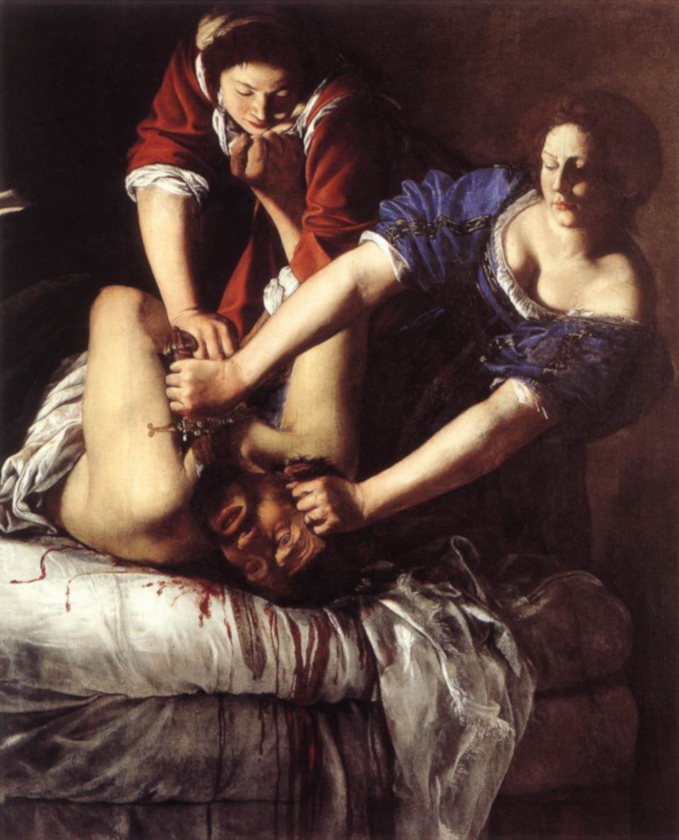 Strong female subjects have been popular as part of “power women” theme in literature and art since the Middle Ages. The story of a brave Jewish woman Judith who, assisted by a faithful servant, cuts of the head of an Assyrian warlord Holofernes, has inspired numerous paintings, including the one by the Roman master Caravaggio, whose chiaroscuro style and dramatic compositions have strongly influenced first Orazio and then Artemisia. Orazio was not only an early follower of Caravaggio’s style but also his personal friend. When Artemisia was just 6 years old, the two artists went to prison together for criticizing another painter’s altarpiece. 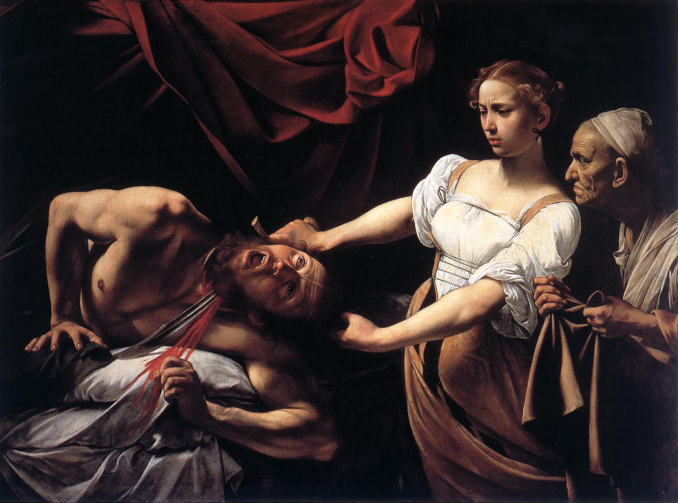 Judith by Artemisia does indeed reference the earlier, famous Caravaggio’s painting. Her composition captures the same gruesome moment of actual beheading and a similar position of Judith’s hands, but the artist has made this subject her own. Caravaggio portrays a woman unsure of herself, sad and regretful for having murdered a man she’s just had in her bed. She leans stiffly away from the man she is slaying, baby-faced and virginal in her spotless white dress. Artemisia’s Judith pursues her lips in a businesslike concentration as if she was a cook slicing a duck’ s throat for dinner. There is no doubt or regret – she is doing a job that needs to be done. She does not gloat but she does not flinch, holding Holofernes’s neck in a strong grip of her wide hands. To add to the realism of the scene, the maid does not stand idly by the side but holds the writhing Holofernes down. Here is another, later version of the theme – same strong hands that pin the man down. 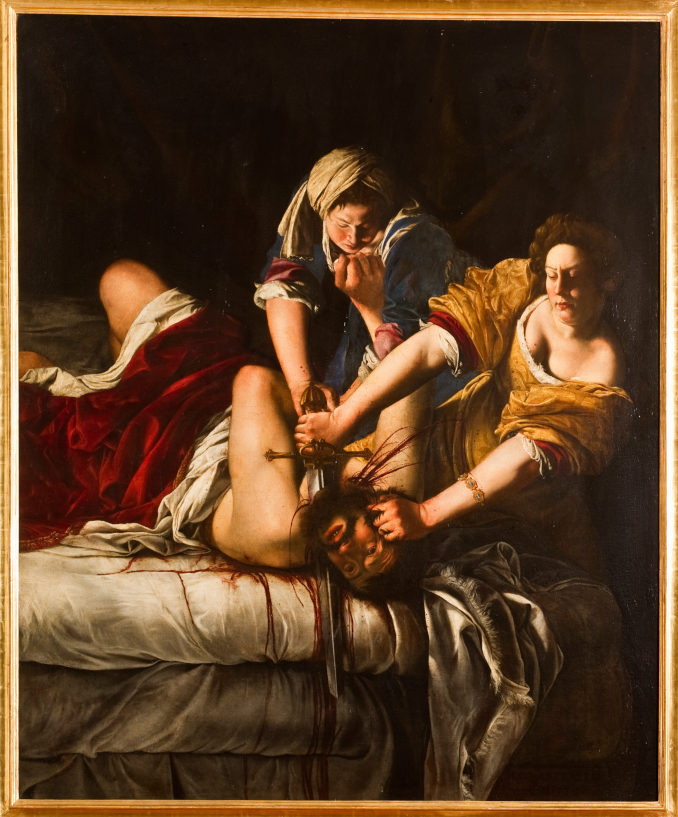 Artemisia painted several versions of Judith so you could say that this was her “art therapy,” or at least that the theme important to Artemisia was that of a woman wrestling for control with a man who coveted her. As much as these paintings convey the rage and frustration of the young woman overpowered, humiliated and deceived by Tassi and his accomplices, she has taken up other “female” themes in her art (almost all her surviving paintings feature women). 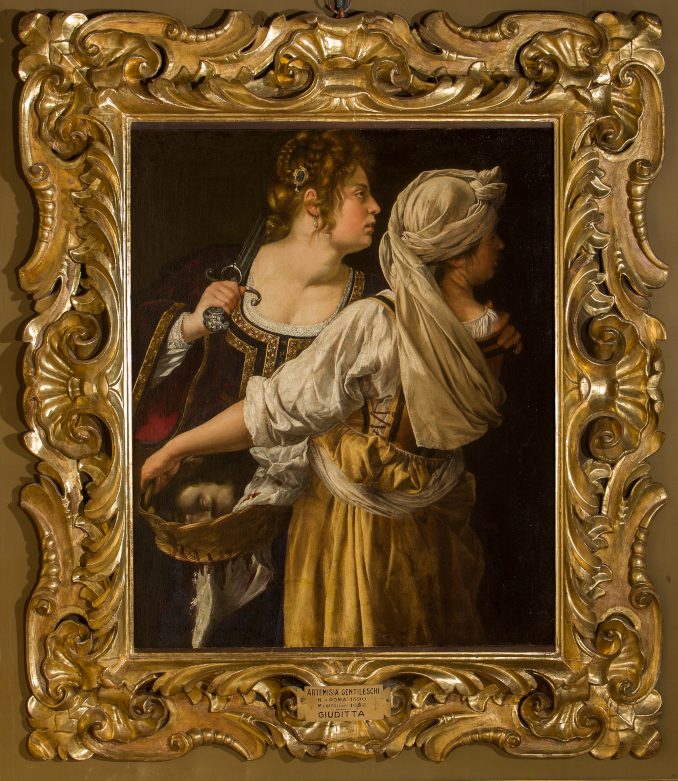 The London exhibition curators brought over one of the most famous versions of Judith, from the artist’s Florentine period. Right after the trial that exposed Artemisia’s “loss of respectability,” she had been hastily married off to Pierantonio Stiattesi (a minor painter who squandered her money), and moved away from her native Rome to the Medici court in Florence. This Florentine version from about 1615 shows Judith after the deed was done but she holds her servant’s arm, her sword raised in readiness, listening anxiously for sounds of guards running in. This is a portrait of vulnerability and anxiety, so much different from relaxed, classicized way other, male painters have painted this scene. For Artemisia this is a psychological portrait of hunted women, not just a picturesque biblical scene. 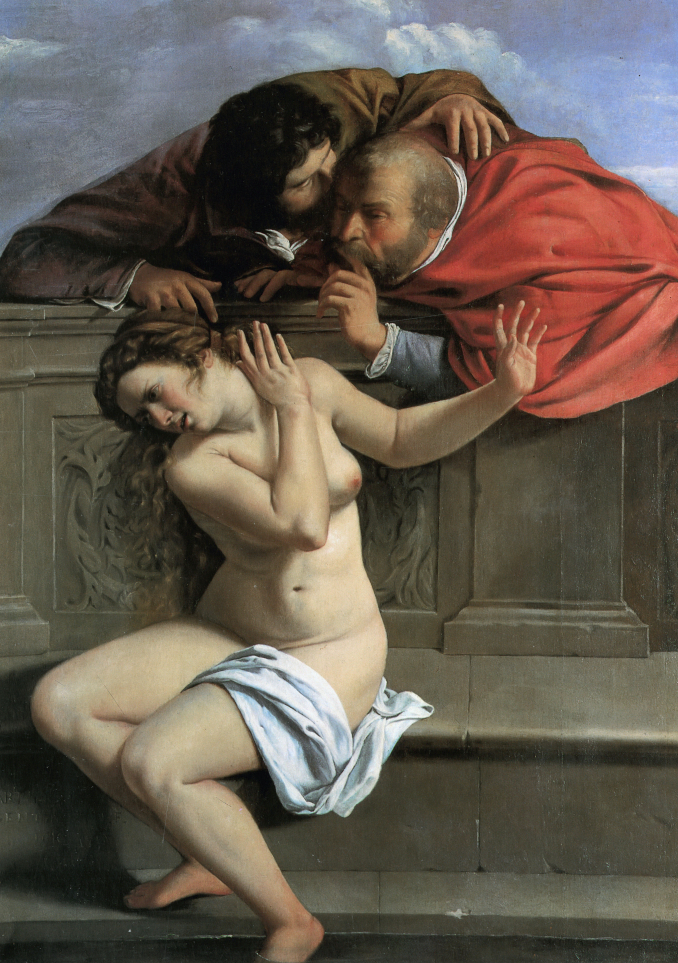 Even before her assault, a teenage Artemisia painted her version of a popular biblical story of Susanna and the Elders – a young woman being harassed by two men who surprise her at a bath (i.e. naked), ogle her, and threaten to sully her reputation if she does not succumb to their advances. In art, this story was often an opportunity to paint nudes for a socially acceptable display. Artemisia’s version is very much her own composition – Susanna is twisting her body away from ogling men who lean close to her, barely fenced off by a retaining wall. The artist kept going back to this theme for years. More dramatic versions were painted after her rape: one in 1622, , another in 1649 and yet another in 1652. Most of her paintings feature women (biblical Bathsheba, Cleopatra, St. Magdalene) and many of them can be read in the context of her trauma. However, 400 years later, what really remains is the art itself. 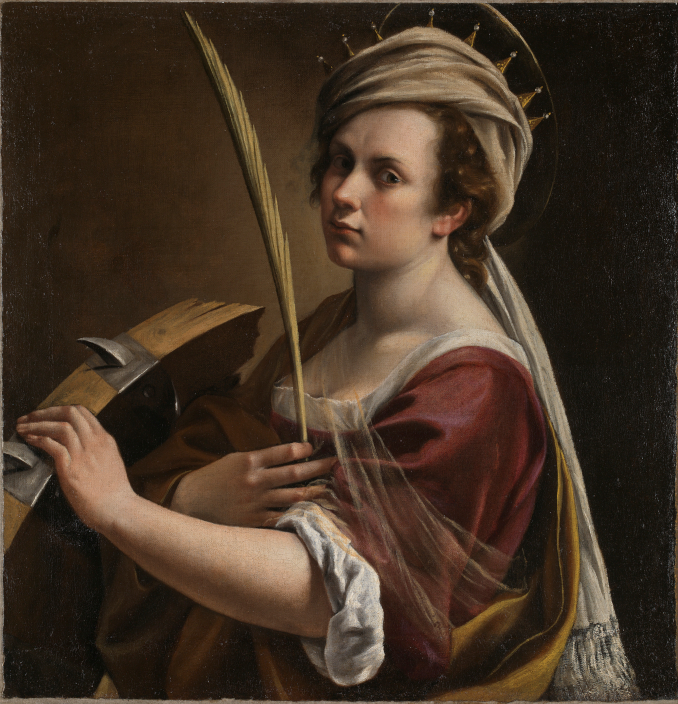 This is brought forward in the exhibition by paintings that are permanently in the UK. The newest acquisition of the National Gallery is a Self-portrait as St. Catherine of Alexandria. Acquired in 2018, this is a painting that that only recently has been attributed to the artist. In that regard, this female painter is similar to another Baroque woman painter, Sofonisba Anguissola whose portraits of the Spanish Royal family have only recently been re-attributed to her. The symbolism of St. Catherine, a woman persevering despite the torture of spiked wheel, was an image that would fit perfectly Artemisia’s biography and artistic interests. 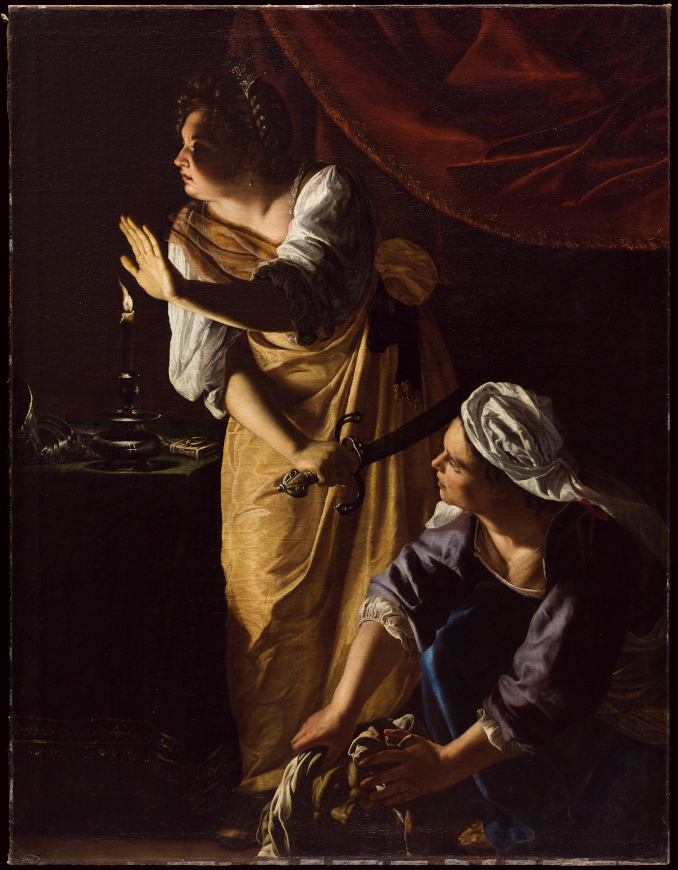 In search of patrons, commissions and perhaps to get away from her wastrel husband, Artemisia traveled a lot. In her later years she was more or less settled in Naples, except her stay in London. In 1638 Artemisia traveled to join her father who was then a court painter for king Charles I. Orazio died suddenly a year later but Artemisia stayed on working for the court for a couple of years. Political unrest and the civil war that culminated in the king’s beheading in 1649 was not a climate for a foreign woman without protectors, and by 1642 she returned to Naples. A delightful yet bold painting from her London period is called Self Portrait as the Allegory of Painting. A convention of the time would be to paint such a self-portrait looking at the viewer, with a finished artwork displayed on the easel. This is not the case here. Artemisia paints herself in a complicated pose, engrossed in the act of creation but the large canvas is tantalizingly bare. This is her face and body (we know how she looked from previous paintings by her and her father) but she is an allegory, an embodiment of the art of painting. The blank canvas is more intriguing and symbolic than had she painted an artist workshop around her. Also, an allegory of painting (la Pittura) would traditionally be shown with her mouth gagged (because paintings do not speak). Not so in Artemisia’s version – this is not an artist who would paint herself being gagged. Instead we look at a strong woman, in command of her craft, dressed in cangianto silk, its green and pink undetones rendered with mastery. Artemissia is indeed a muse of painting in this portrait.