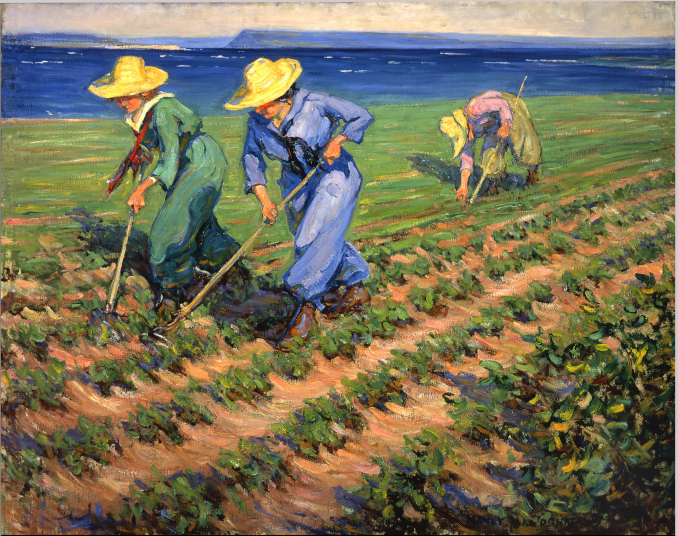 Women have not always been stuck at home just sewing and running households. They have also been out in the fields as farmers or trading in the markets as merchants. Industrialization brought women into cities, sometimes to work in shops and factories, but sometimes into new and more specialized professions—actresses, ballerinas, nurses, teachers, typists, telephone operators, and scientists. In the 20th century, the two massive World Wars brought about further changes in traditional work roles, forcing men to accept women as administrators, operators of heavy machinery, car mechanics, or journalists. Meanwhile, painters recorded these moments of cultural and economic transition in their art. 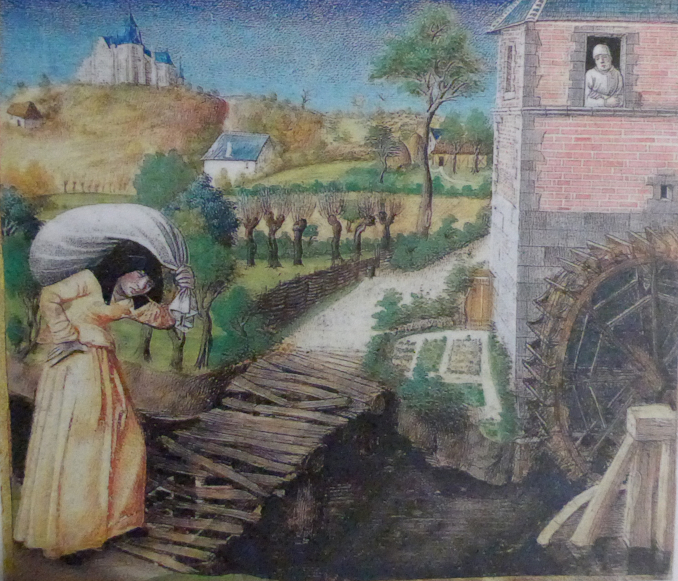 There is a saying that a picture is worth a thousand words. The image from this manuscript, a copy of a Barthélemy D’Eyck miniature, is a perfect illustration of the division of labor between the sexes. It shows us a woman carrying grain to a water mill, nearly bent in half under the burden of her sack. The man in the window, the miller, is relaxedly waiting for the peasant woman to cross the rickety bridge to his mill. Though this illustration was drawn from real life, it can also serve as a metaphor for life in the Middle Ages for many women.

The image comes from a devotional book, Mortification of the Vain Pleasure, by the French aristocrat René D’Anjou. The “Good King René,” as he is known in France, employed the eminent illustrator Barthélemy D’Eyck, whose miniatures are among the finest examples of medieval art. D’Anjou was a Duke of Anjou and, briefly, a King of Naples, but he had a life full of ups and downs. Although he inherited many titles and honors, he also experienced the deaths of his two sons—murdered by poison—as well as constant conflicts over succession and land rights. His most enduring legacy, however, is in the domain of the arts. The duke was a talented writer and a lifelong patron of artists. He is credited with creating, or at least commissioning, several richly illustrated manuscripts that are a testament to late Gothic culture, further inspiring centuries of Romantic literature and art. 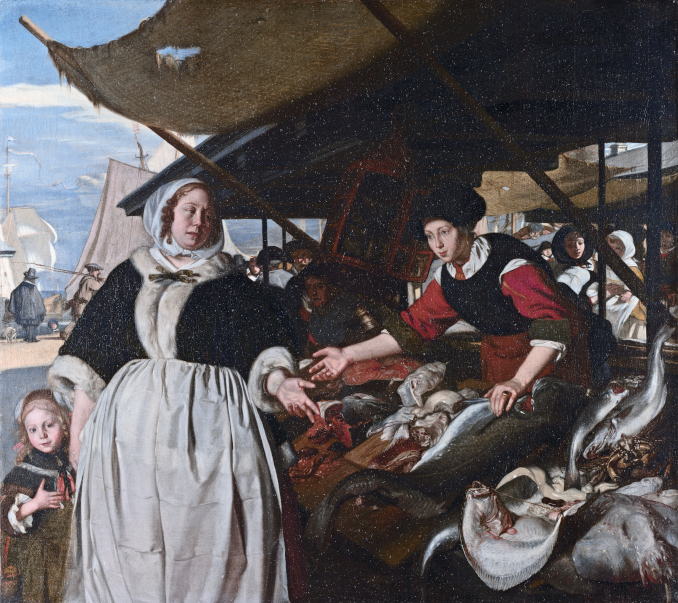 If we advance 300 years further along art history’s timeline, traveling from a French wheat field to a prosperous Dutch town, we see the much more complex world of the Dutch Republic during its mid-17th-century heyday. Emanuel de Witte’s painting of a fishmonger offering her wares to a housewife is an interesting way to accomplish what originally must have been a simple commission to paint his landlord’s wife. De Witte specialized in painting churches and building interiors, having studied architecture. This is possibly the reason we see here a complex structure of intersecting lines—created by poles of an awning, ship sails, the position of the fishmonger’s body and hands, the slanted display board, and even the twisting fish. They all crisscross, adding energy and interest to the composition.

Adriana van Heusden, the wife of de Witte’s landlord and patron, is presented here in her full glory as a prosperous housewife and successful mother. Her coat is lined with mink, and her daughter is healthy and smart—throwing curious, intelligent glances from behind her mother’s fresh apron. What is perhaps even more interesting for us several centuries later are the pieces of information we can deduce from other elements of the painting. For example, there are seaworthy ships in the busy harbor—a sign of bustling international commerce. There is a throng of shoppers and traders, indicating that the country is prosperous. And then there is the display of all kinds of fish, vividly painted in the best tradition of Dutch still life. The wares are being presented by a seller who, despite being a secondary figure in the commissioned portrait, draws the viewer’s attention in equal measure. She is a working woman whose work clearly keeps her prosperous and happily busy. She is wearing jewelry and nice clothes, and she spends her days interacting with customers and other merchants. 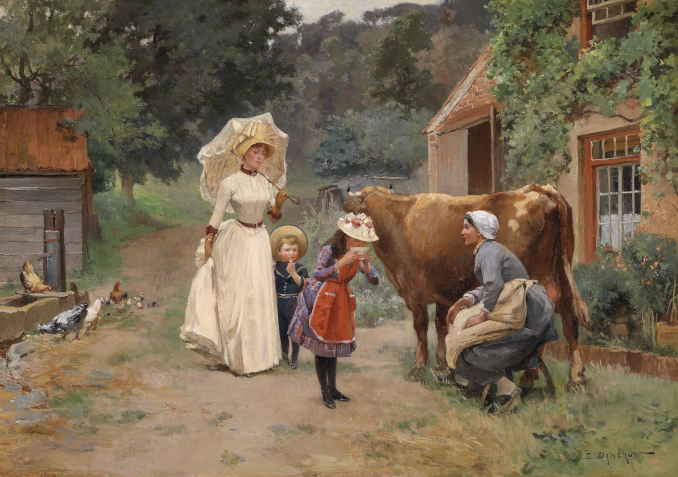 The minor French landscape artist, Emile Charles Dameron, painted Visiting the Farm in 1908. Perhaps the painting was meant just as a pleasant genre scene extolling the virtues of a healthy life in the countryside. At the time, drinking milk “fresh from the cow,” as is being done in the center of this picture, was recommended as protection against tuberculosis and other diseases. What we also have in this “cute” country scene, though, is a juxtaposition of the fates of two different women. They are the same age, but their lives are not the same. One was born prosperous, and her only responsibility is to be a good mother and wife. The other was born a peasant, and her fate is to be a milkmaid. Their momentary encounter will end as soon as the child has finished tasting the milk and her mother has paid with a coin for the treat. One of the women will probably work hard all her life, while the other one will probably remain a society lady, not doing any work. Many novelists and painters of the time considered it their duty to make society aware of the toils of the poor. Perhaps this was Dameron’s intention in this painting—but if so, he expressed it in a subtle way in a pleasing picture. 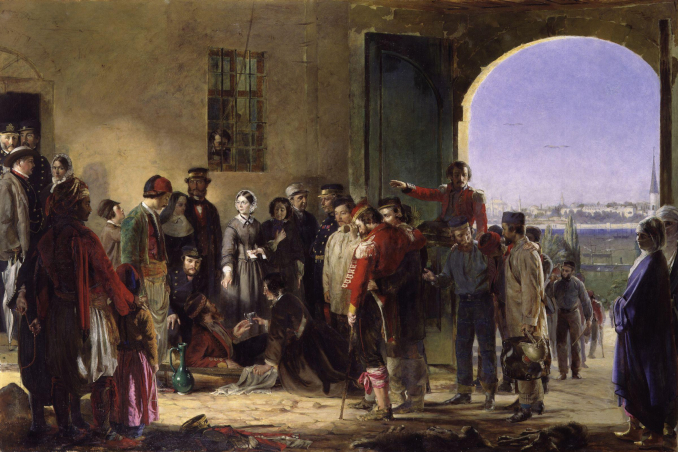 Florence Nightingale was a very educated, upper-class Englishwoman who rejected traditional expectations of marriage and a life of leisure. Instead, she found her calling when she went to aid the British war effort during the Crimean War in 1854. There, she launched the modern profession of being a nurse (as opposed to the amateur care provided in battlefields by untrained servants or wives of soldiers). With a public plea to English society back home, she raised funds for a proper field hospital, and she used common sense and hygiene to decrease the number of infections and bacterial diseases. A few years later, she founded the first school of nursing in London.

The Mission of Mercy: Florence Nightingale Receiving the Wounded at Scutari was painted by Jerry Barrett, who traveled all the way to the front to portray the famous nurse. Although she rejected his multiple requests to pose, he managed while there to make a sketch, complaining that his model considered posing a waste of time. Had the nurse been consulted on the painting, she might have corrected an inaccurate portrayal of nursing. The real Nightingale would most likely not have allowed a wounded soldier to lie down in the dirty straw on the ground. With barely 38 nurses tending to thousands of sick and wounded, Nightingale was dealing with staggering numbers of patients—over 4,000 soldiers died within the first winter. Nightingale used her skills of organization and statistical analysis to decrease the ravages brought about by dysentery, blood infections, and typhus. “Every nurse ought to be careful to wash her hands very frequently during the day”; this was Nightingale’s directive, surely a novelty given the mid-19th-century state of medicine.

In the end, Barrett was right—posing for the picture was as important as nursing. The painting, for all its compositional artifice and grandstanding, is a vivid portrayal of an exceptional person who overcame the barriers of her social class, sex, and social customs to create a new profession. Thanks to the artist, we have at least an imaginary commemoration of Nightingale’s pioneering work. 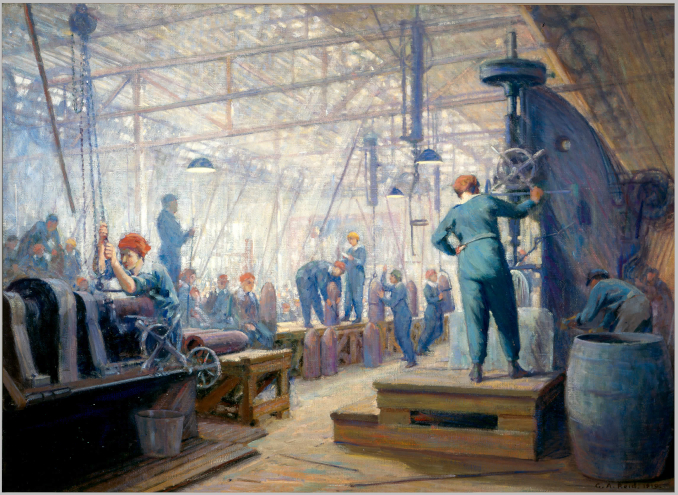 Canada’s War Museum has in its collection a couple of artworks that portray women pushed into the workplace by World War I. One of the artists, Manly E. MacDonald, was an Ontario artist of the early 20th century who often painted farming activities from his surrounding countryside. His painting titled Land Girls Hoeing (top of page) draws on this farming theme, with one exception—the farmers are young women who volunteered to keep Canada’s food production going. These women, who would go on to be called farmettes, would often wear loose, improvised overalls and broad-brimmed hats to protect their city-dweller complexions. The diagonal slashes of the produce rows and the girls’ movements going the other way give this picture an alluring energy of accomplishment. These young women are also doing more than hoeing soil. They have a purpose that is driving them forward: to help with the war effort and “do their part” while their men are at the front. In 1918, there were 2,400 such women working the land in the Canadian region of Niagara.

Another painting from the same collection portrays factory workers at a car factory in Toronto. Here are women doing, for the first time, jobs that were the exclusive domain of men until the war came on. By 1917, about 25,000 Canadian women were working in factories, some of them in the production of weapons. George Agnew Reid, who studied in Paris toward the end of the 19th century, had become an eminent Canadian artist by the early 20th century. Reid participated in a commemoration of the Canadian WWI effort with Women Operators, a great painting that does more than just document factory work. The central space is lit with sun streaks coming through the roof onto women in blue overalls. Their orange headscarves stand out against the blue-gray lumps of the machines. There is a chilling contrast between the figures of these women and the objects they are handling—which are mortar shells. 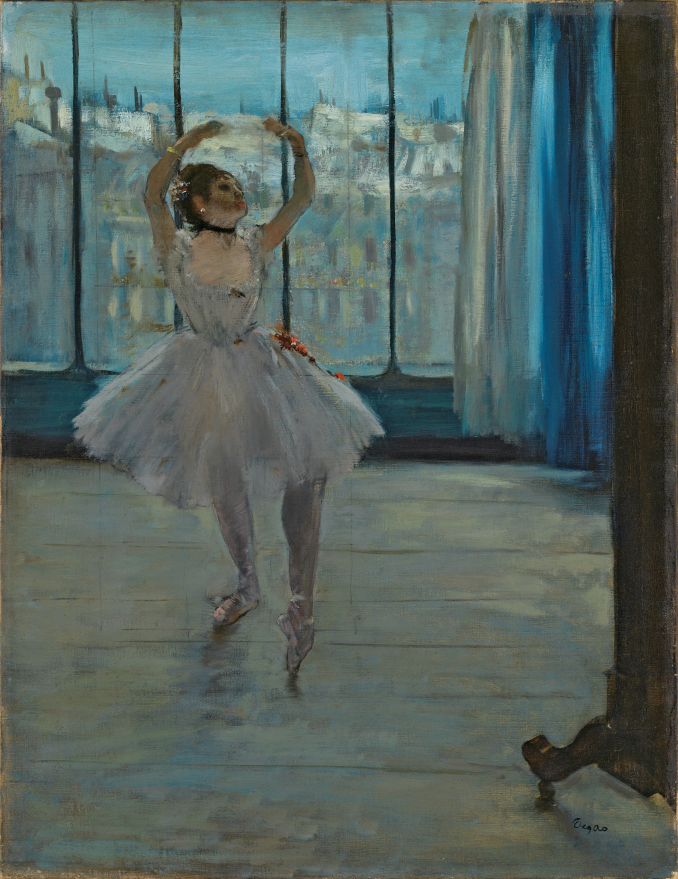 Let’s not end this panorama of working women with a war picture, however. Let’s go instead to one of the perennial favorites of the 19th century. Although Dancer in Front of a Window is by Degas—the ultimate eulogist of everything “ballet”—it also documents a technological change, hinted at by the painting’s alternate title: Dancer Posing for a Photographer. This ballerina, a woman who works very hard every day to perfect her difficult skill, is not only posing for a painting but is shivering in the morning light, striving to stand still for an unseen camera. While many of Degas’ paintings of ballerinas are bathed in the pinkish light of a busy studio or the warm tones of a theater stage, this is a winter scene with snow on the roofs and a cold blue light that underscores the chill in which the dancer is holding still for both photographer and painter. In this case, it was probably the same person, because Degas was an accomplished photographer himself. He was fascinated by the new medium and used it a lot in his work and private life.

Technological and societal changes would soon bring about new roles for working women. While Degas’ dancer would not have become a doctor, pilot, or politician, a few decades later, others soon would.