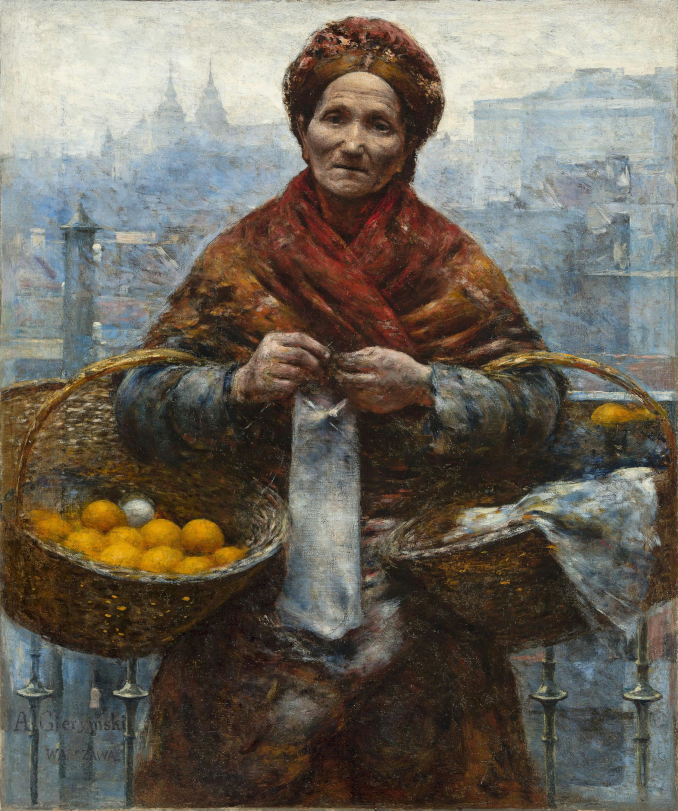 There is nothing attractive about toil—this mind-numbing effort of farming or doing some menial, repetitive tasks—to the person who is doing it. It can however, be appealing to artists as a subject, especially if such hard-grinding toil is experienced by the “weaker sex.” Artist could show hard work in a sympathetic light, often with an express purpose of tugging at the gallery public’s heartstrings.

Jewish Woman with Oranges is one of the most famous canvases in Poland. Alexander Gierymski was born in Warsaw, and his early paintings from the last quarter of the 19th century portrayed the city’s working class and the poorest inhabitants of the riverbank quarter. This portrait of a street-seller was painted in three versions. One of them is believed to be completely lost; one (Jewish Woman with Lemons) is at the provincial museum in Katowice; and this one, the most famous, went missing for decades. It was stolen in 1944 from the National Museum in Warsaw—just after the Warsaw Uprising—eventually resurfacing in 2010 at an auction in Hamburg. It had to undergo an extensive restoration before being hung again (with great ceremony) at the National Museum. It belongs to the canon of Polish masterpieces, and even during the decades when it was missing, it was still included in Polish school textbooks.

Gierymski was a realist painter (at least until he got exposed to Impressionism when he emigrated to Paris) and to create this painting, he actually used a photograph. However, a fuzzy black-and-white photograph would have only furnished a rough guide for a painting in which the brightly hued oranges of the woman’s rusty-colored shawl and red hair contrast with the blues of the city panorama and the gray sock the woman is knitting. Although Gierymski was famed for his deft use of color as well as his nuanced nightscapes, this is not why this painting is so remarkable. The old woman’s expression of hopelessness is what stops the viewer’s gaze. She has clearly spent a long time in poverty and misery. She is peddling luxurious, imported objects, but her own life is barely a subsistence. She does not even have a stall to sell her wares, and she is trying to make a few more coins by knitting. This old woman belongs to the poorest class of people who have to work regardless of age and for very little reward. Sad as this image is, however, it is a magnificent piece of fine art. 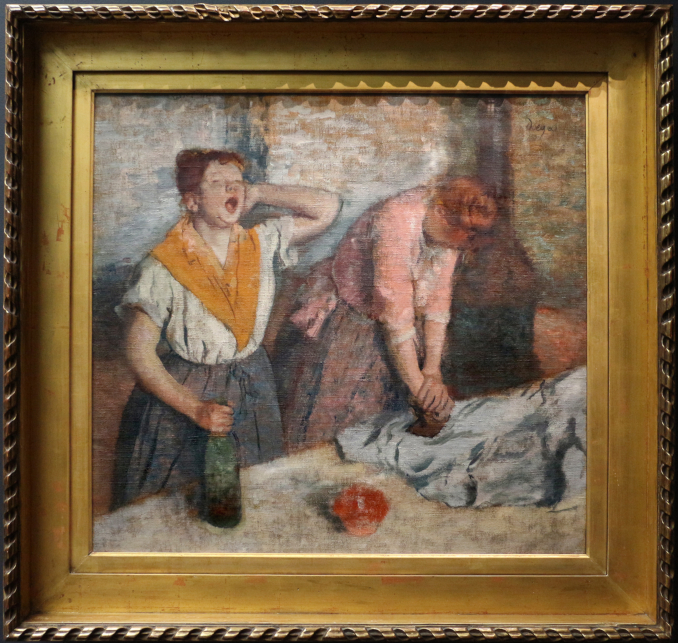 In 19th-century Paris, apparently as many as one quarter of all women working there were employed in laundries. Because laundry services were often open to the sidewalk, it would have been easy for an artist to watch the women’s activity all day long. Degas was as fascinated by the women working in these steamy rooms as he was by ballet dancers, jockeys, and orchestra musicians. He painted laundresses for about 25 years, starting in 1869. The portrayals of the labor of Parisian workers by Degas and fellow French painter Honoré Daumier went in tandem with literary descriptions of the laborers’ ceaseless work found in novels by Emile Zola and the Goncourt brothers.

This particular composition, called Women Ironing, is actually one of four versions by Degas. (The other very famous version is displayed at the Norton Simon Museum in Pasadena.) While Degas was one of the Impressionists in terms of his loose-brushstrokes style, his use of light, and his focus on themes of daily life, he was actually a realist at heart, striving to capture every nuance of people’s behavior. This is what he is doing in this painting, which registers a point in time in the young woman’s long day. Hot, thirsty, and exhausted, she is taking a moment to stretch and to take a sip straight from the bottle, even while yawning uncontrollably. The other laundress does not even react—she is pressing the hot iron into the fabric as quickly as she can. Irons at the time had inserts (slabs that in some places were called the iron’s “soul”) that were periodically heated in the oven; they had to be used quickly before the heat of the insert dissipated. Laundering and ironing were hot, relentless toil.

Painted in more or less the same period but thousands of miles to the east, The Washerwomen by Abram Efimovitch Arkhipov, a Russian realist painter who lived and worked both in Tsarist Russia and later in the Soviet Union, shows us the same theme of women laboring all day long in a hot room over soaked fabrics.

Arkhipov was born in a village, and even though he spent most of his adult life in Moscow, he never forgot his country roots. He specialized in realistic portrayals of the life of the common people—both in villages and in cities. He painted many scenes from the lives of working women. For The Washerwomen—one of his more celebrated works—he went looking for models among the public laundries in the city. Like Degas with his ballerinas, Arkhipov would spend hours sketching these laundry workers. Unlike Degas, he painted en plein air, seeking realistic scenes of work in cities and villages; these days, he might be a photojournalist, such was his fascination with capturing life as it happened. This is why this painting has such realistic clouds of steam and smears of water on the floor—he painted what he saw in the most dramatic way possible. The heroines of this canvas are the two women in the front, their bodies gaunt from physical exertion, their faces prematurely aged. One of them is intent on keeping up with the younger ones, while the other one, utterly exhausted, is just dully sitting. There is nothing left in her—no physical strength, no hope for a change, and no spiritual spark. She is completely spent. While the Degas painting is colorful and might even bring out a smile at the laundress who is yawning so unabashedly, Arkhipov’s portrait of the same activity, painted in dark colors, is hopeless and accusatory. This is a portrait of people reduced to animal stupor—they will work like horses until they collapse. 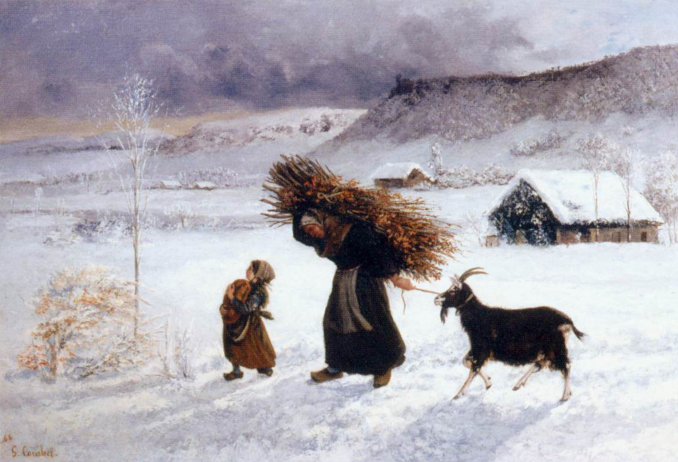 For Gustave Courbet, protesting against the monarchy and the privileged classes was a life mission. In fact, he got into major trouble during the 1871 Paris Commune revolt, when he was a leader of the Communards group that toppled the column in the Place Vendôme. Courbet objected to this symbol of war and Napoleon’s imperialism with a “damn the consequences” attitude. The consequences were severe for him, however; he was found responsible and ordered to pay for the new column—an enormous sum of 323,000 francs (about $1.3 million today). He was forced to go into exile to Switzerland where he eventually died, never seeing his city again.

From the very start of his career, Courbet aimed to scandalize his fellow artists, critics, and the gallery public alike. His early canvas, The Burial at Ornans, depicted ordinary village people instead of historical or religious figures; his self-portrait was that of a wild man; and his Young Ladies on the Banks of the Seine was universally panned by critics as being too shocking for an exhibition display.

In 1866, when he painted his most scandalizing nude act, The Origin of the World (as recently as 2018, I witnessed a teenage boy gasp in shock when he stumbled on this painting at the Musée D’Orsay), he also painted The Poor Woman in the Village. It’s not his best canvas, tottering dangerously close to the Victorian cuteness of genre pictures—what with a snowy landscape, a cute goat, and an even cuter little girl leading the small group—but there is no mistaking the burden that the woman is carrying. The wood bundle is almost bending her in half; her only treasure is that milk-giving goat, and she obviously has no choice but to labor hard to provide for her child. Cute or not, Courbet says, this how poor people struggled, far away from the salons of Paris. 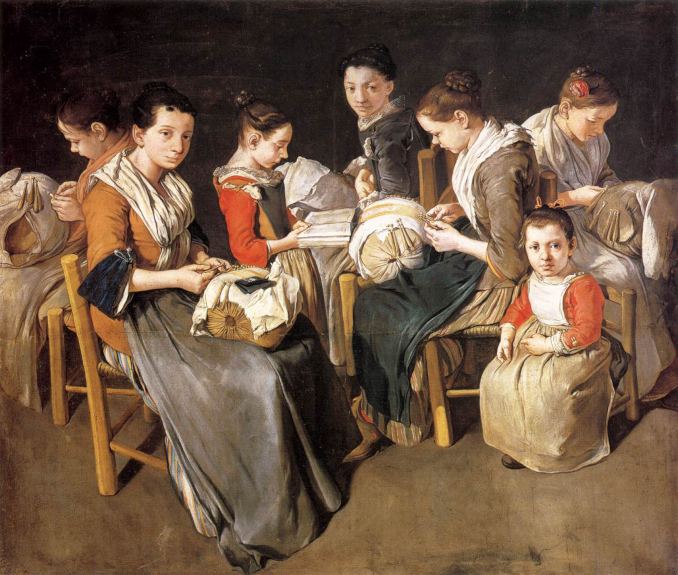 Eighteenth-century art is that of Rococo tapestries, frescoes, and paintings full of mythological allegories and religious scenes rendered in an excessive style of twisted lines and bulging fabrics. François Boucher (in tapestry) or Giovanni Battista Tiepolo (on a ceiling) created decorations well suited to all the multitiered wigs, satin ribbons, silk gowns, balls, and parades that would eventually end with the French Revolution, Napoleonic wars, and technological changes of the 19th century. While the music of the period reached heights of clarity and precise construction, especially once Mozart and Handel appeared on the scene, Rococo paintings went in the other direction—toward an opulence that outdid the Baroque to the extreme. (Not surprisingly, art eventually swung toward neo-classicism when the excesses became. . . well, too much.)

In this context, it is even more remarkable to look at Women Working on Pillow Lace, painted in 1720 by Italian artist Giacomo Ceruti. Ceruti’s art was far removed from the mythological extravaganzas of his contemporaries. Like Jean-Baptiste-Siméon Chardin, Ceruti painted the other side of society, the one that was shown in satires and genre paintings but less often observed with a realistic eye. Here, he portrays work at an orphanage in Brescia, the city in northern Italy where he lived and a place known for its Dutch-style industriousness. Orphanages often were glorified workhouses. Girls and young women with no families and no dowries were put to work at the earliest age. There is one girl here who is reading the Bible to all the other girls, who are bending over their boring and exacting work of lace-making. Their faces are curiously similar, as if Ceruti wanted to say that this mind-numbing work deprived them of individuality. These girls are staring at us expressionlessly as if their life had ended even before it began.

Realist paintings of the 18th or 19th centuries were probably some of the last direct expressions of artists’ empathy toward the toil of the poor. With the advent of photo reportage, the burden of portraying women at work, and especially excessively hard work, largely shifted from fine art to photography. By the 20th century, fine artists had moved on to abstract paintings, pop art, or performance and installation art.