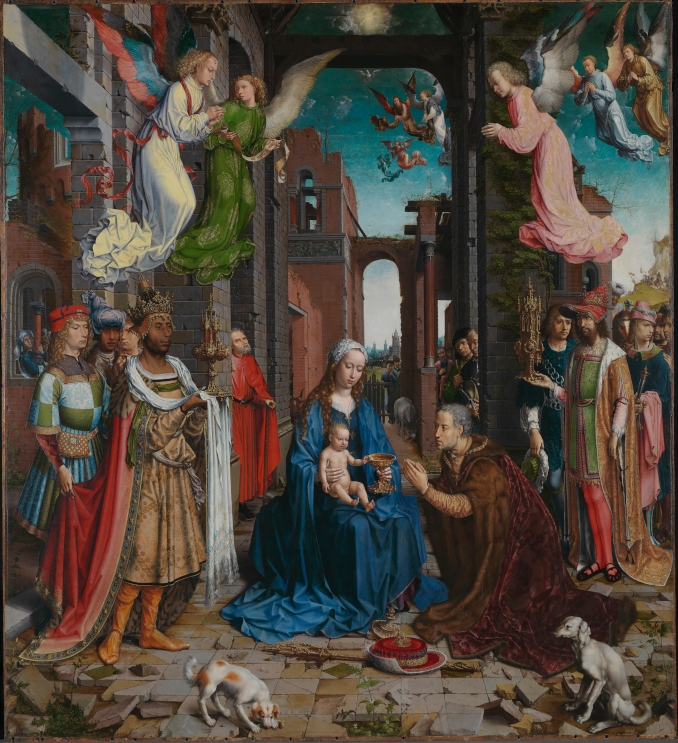 One of the most artistically alluring Christmas themes is the one known as the Adoration of the Kings. The exotic story of the three rulers of faraway kingdoms, led by a star to Bethlehem to greet a newborn son of God, has long excited the imagination of both the faithful and the artists attempting to paint them in the most interesting way possible. The National Gallery in London, one of the most well-endowed repositories of fine art in the world, has a resplendent collection of masterpieces on this theme. They would all have been on display just in time for Christmas and Epiphany if not for the fact that London had to undergo a second, traumatic lockdown. The world’s art treasures have all gone back to online viewing.

The star of this collection is a painting by Jan Gossaert, who painted around 1510 this large and complex picture for a Benedictine abbey altar in east Flanders. About a hundred years later, the panel caught the eye of the Netherlands rulers Albert and Isabella, who purchased it for their Brussels palace. Afterwards, the painting made its way from one titled household to another, finally finding a home at London’s National Gallery in 1912.

The composition has two distinctive areas. On the lower part, we see the kings paying homage to the Holy Family. The skies, meanwhile, are reserved for the divine presence of nine angels, who seem to be floating in an orderly line and waiting to land—were it not for the fact that Gossaert painted them in the early 1500s, we might compare the angels to airplanes circling at a busy arrivals corridor…. The angels are garbed in taffeta, which was not only the most luxurious kind of fabric but also presented a great artistic challenge to render accurately the two-tone cangianto silk. Gossaert must have found a great pleasure in coming up with all these different textures: the sheen of Mary’s blue silk and the kings’ sumptuous robes of velvet, brocade, and fur linings. Caspar, the kneeling king, is identified with an inscription “Le roi iaspar” on a lid of a chalice by Mary’s feet. Balthasar and Melchior, standing on each side, are both holding golden vessels—rendering the goldsmithing patterns would have represented another artistic challenge.

The artist’s idea of a humble stable are very picturesque Roman ruins. The traditional donkey and a cow are in the background, while the front stage is taken up by dogs. These two canines are actually copies of dogs that can be found in religious paintings by Albrecht Dürer and Martin Schongauer. Because Gossaert borrowed some of these elements and had a style similar to Dürer’s, this painting was attributed to the more widely known artist as late as in the 18th century. Thankfully, Gossaert must have been very proud of his work and signed it—not once but twice—on Balthasar’s hat and on his attendant’s collar; eventually, his signatures were identified. There are so many colors, textures, symbols, and different people in this painting that you can stare at it for a long time and always find something new and beautiful. This is what a great altarpiece would have aimed for—a contemplative piece of art that both the monks and the faithful could admire during services. 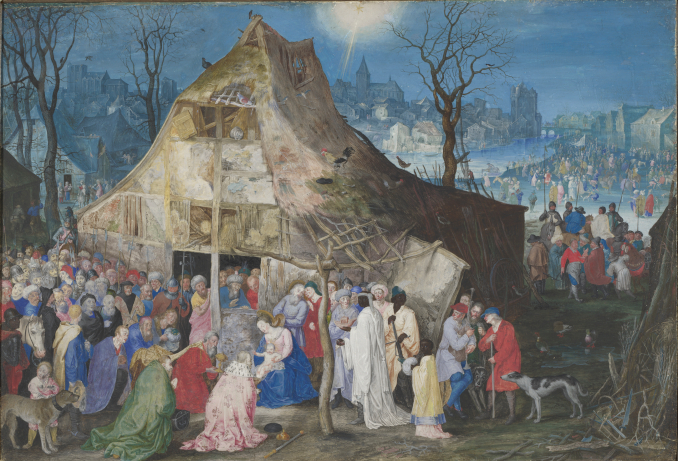 The Adoration of the Kings. Jan Brueghel the Elder (1598). Photo © The National Gallery, London.

Breughel’s smallish painting on vellum from almost a century later is hardly a contemplative altar piece, but it is charming, especially for the modern eyes. This stable is far from Gossaert’s elegant stone ruin—it is a ramshackle hovel, complete with chickens on the thatched roof, a cat in the attic, and pigeons over the straw holes. That triangular hut resembles the one painted by Heronimus Bosch in a very famous Adoration triptych about a 100 years earlier. Its picturesque poverty stands in sharp contrast to the grandeur of those assembled and the sumptuous folds of Mary’s blue cloak. While the kings and their entourages basically offer a panorama of courtiers’ and burghers’ faces and attires, the vast urban background extends this scene to create an entire world known to this artist.

Jan Breughel the Elder, part of a large artistic clan, was the son of the famous Flemish artist Pieter Breughel the Elder, whose Adoration panel is also in the National Gallery collection but presents a much different and darker vision of the world. Jan’s children and grandchildren became or married painters, and his grandmother and brother were artists as well. Jan made his fame through his floral compositions and the invention of so-called “paradise landscapes.” He was a friend of Paul Rubens and collaborated with him on pictures that required his exceptional landscape skills. They are evident in this Adoration featuring an incredibly detailed cityscape with buildings on both sides of a half-frozen river, winter trees, and throngs of all kinds of people milling about.

Adoration of the Kings. Sandro Botticelli and Filippino Lippi (about 1470). Photo © The National Gallery, London.

Filippo Lippi was an unruly Florentine monk whose penchant for adventures got him into repeated trouble, one of the biggest scandals being his affair with a nun that resulted in the birth of his son Fillippino Lippi. Fortunately, Lippi senior had a talent for painting that earned him church commissions and a pardon for his carnal transgressions. What’s more, he passed his talent to his illegitimate son, who soon surpassed his father in artistic accomplishments and fame. The younger Lippi started out as an apprentice to his father’s pupil Sandro Botticelli, and together they painted in 1470 a panel depicting The Adoration of the Kings.

The Medici court in Florence periodically celebrated the feast of Epiphany with a parade of costumed characters—the Magi as well as the Holy Family—and this festive congregation of colorful performers and spectators must have served as inspiration for Florentine artists. Thus, this collaborative Lippi-Botticelli painting is populated with a large crowd of elegantly dressed courtiers, restless horses, a court jester, and musicians amid the banded columns of the Florence cathedral’s walls (albeit against a Netherlandish-style background landscape). Although Botticelli is the author of most of the painting, since it was created in his workshop, Fillippino Lippi is credited with painting the group of figures in the center front, including a man in a yellow robe adjusting his sleeve and the man kneeling down. 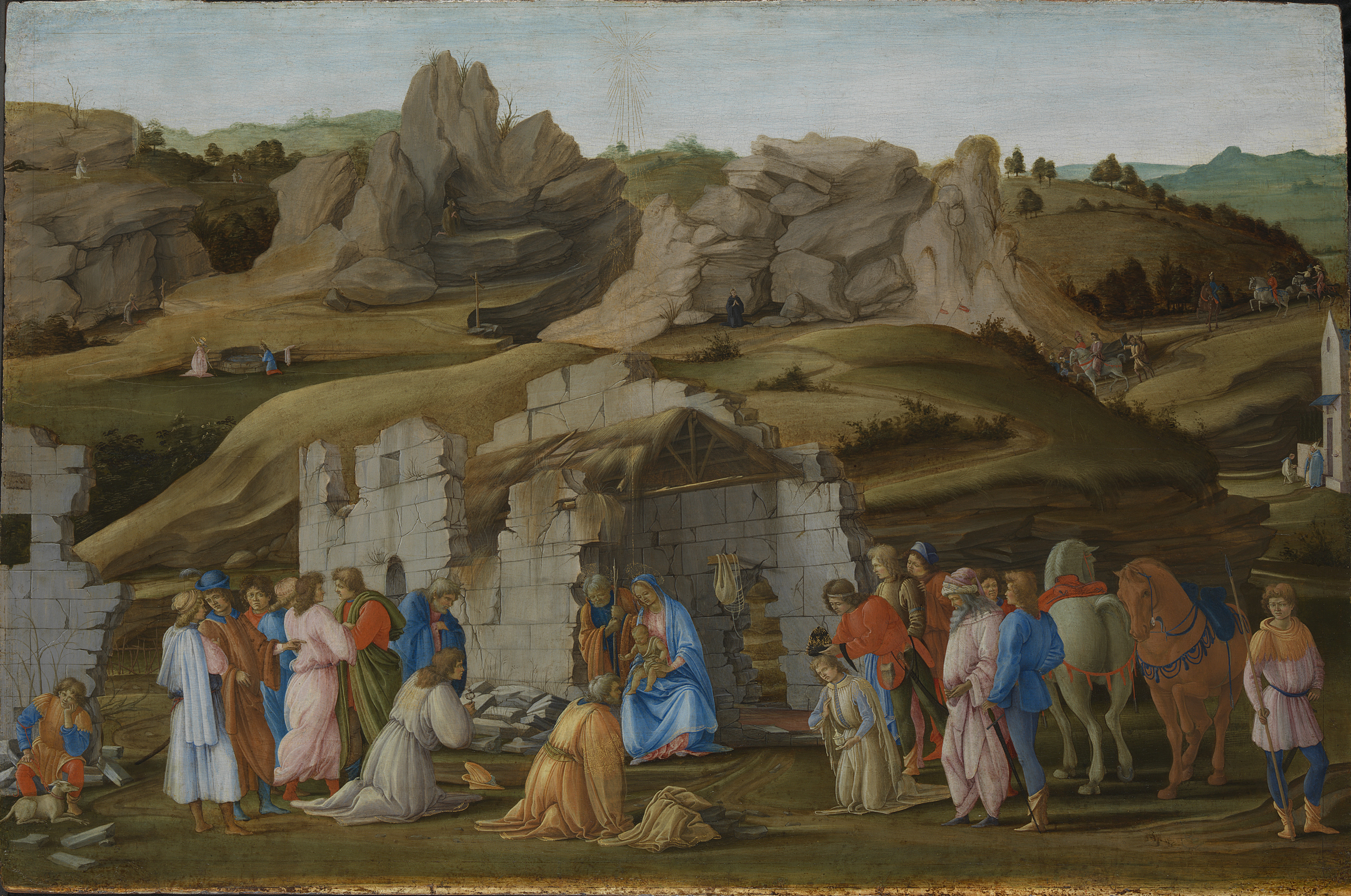 The Adoration of the Kings. Filippino Lippi (about 1480). Photo © The National Gallery, London.

Eventually, Filippino Lippi became an artist in his own right, very much in demand for his exceptional skills as a draftsman and decorator of chapels both in Florence and Rome. He painted his version of The Adoration of the Kings when he was in his twenties as a commission for a wealthy and religious landowner. Perhaps this explains why this Adoration includes figures that are not part of the typical canon for this theme: Saints Mary Magdalene, Bernard of Clairvaux, Jerome, and Augustine, and even Archangels Raphael and Tobias. Lippi’s landscape is also different from the earlier collaborative painting with Botticelli—his picturesque, rocky, but empty wilderness dominates the picture, with just a small group of figures grouped next to rudimentary ruins. Everybody is dressed in colorful but simple “antiquity” robes that are a far cry from the Italian Renaissance brocades and velvets that Lippi would have seen in the streets of his native Tuscany and that he would later portray in his 1496 masterpiece version now displayed at the Uffizi in Florence. Lippi painted the much humbler National Gallery version of the Adoration 15 years earlier in the spirit of religious devotion of his patron, a follower of the fiery monk Savonarola. Ironically, when this painting entered the National Gallery in 1882, it was still attributed to Botticelli and only a century later was properly credited to this delicate and a bit underappreciated artist. 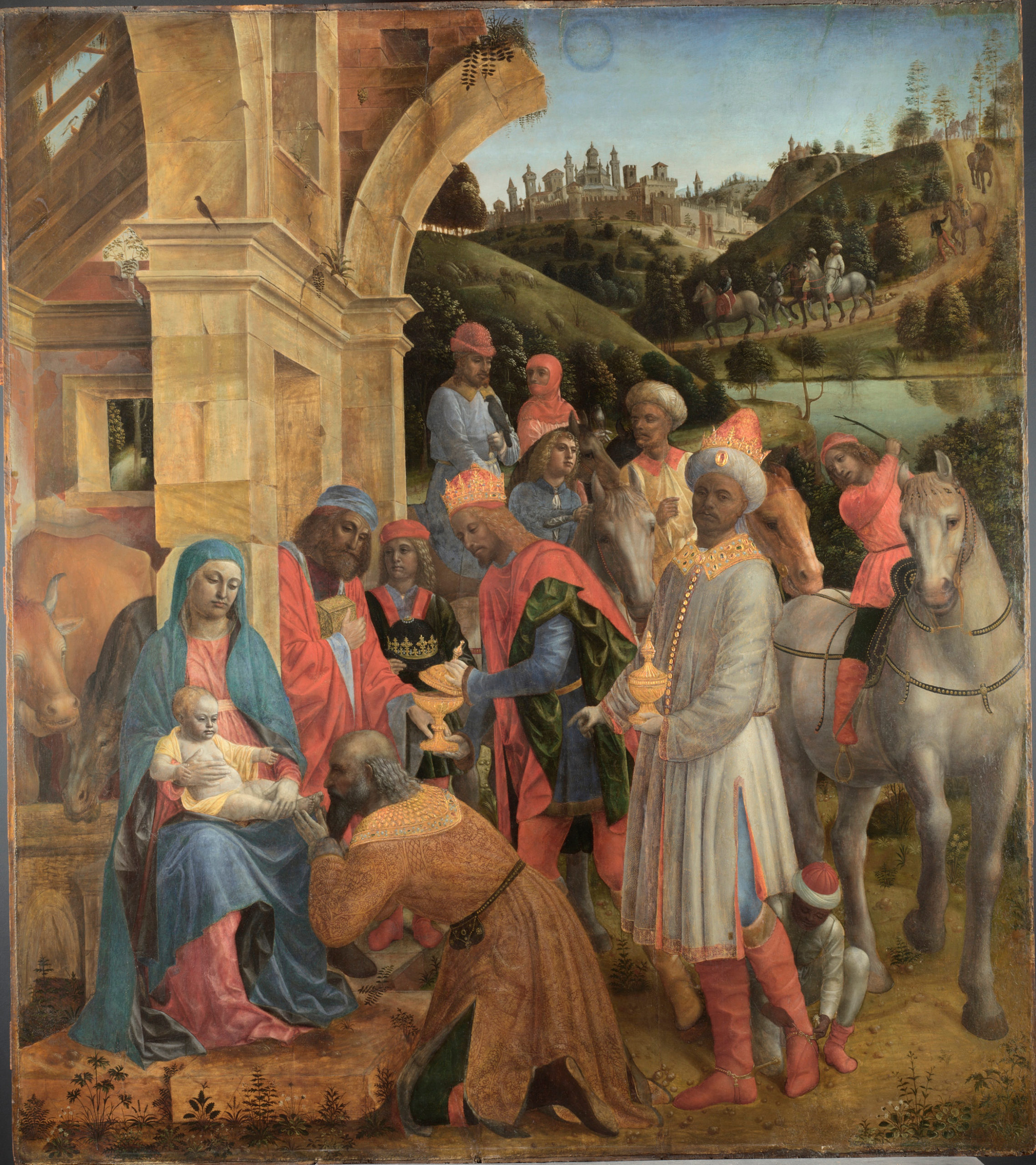 The Adoration of the Kings. Vincenzo Foppa (perhaps about 1500). Photo © The National Gallery, London.

The theme of the Magis’ journey to a remote shelter outside the city has always offered artists an opportunity to paint an interesting landscape, especially in times when the idea of a freestanding landscape painting did not yet exist. Vincenzo Foppa was an Italian artist, but his northern roots (he was born in Brescia and worked in Milan) meant that he was well versed in the northern Renaissance painting tradition. As a result, when he painted his Adoration around 1500, he pictured his native Lombardian rolling hills in a Flemish landscape style; his composition of stiffly vertical figures echoes northern painting conventions as well. However, Foppa also drew from the humanism of Italian Renaissance art, endowing his figures with facial expressions and situations drawn from life and individualized. For example, King Balthasar is looking directly at the viewer, with the serious expression of a man who has seen quite a lot in his life. We can also imagine a biography to the character of the squire who is astride a magnificent royal horse, but because he is too short to reach the stirrups, he has to put his foot into an improvised knot. The kings’ retinue is not lacking anything; they even have two falconers holding the exotic birds in the background. In the present day, Mary’s blue cloak has lost the top layer of lapis pigment, and the pink of some faces has faded to grey; numerous frescoes and other works by Foppa have been altogether destroyed. And yet, though there are many Renaissance masterpieces depicting this scene—by Botticelli, da Vinci, Raphael, and Lippi—this panel by a now lesser known Lombardian artist holds its own. Foppa’s name may have faded in art history, together with the crumbled frescoes, but this magnificent panel has fortunately survived. What’s more, it has survived in one of the most famous art museums of the world, amid other splendid Adorations by Renaissance masters.

You can view Gossaert’s Adoration of the Kings at the National Gallery, London as part of an online presentation between February 6-28.