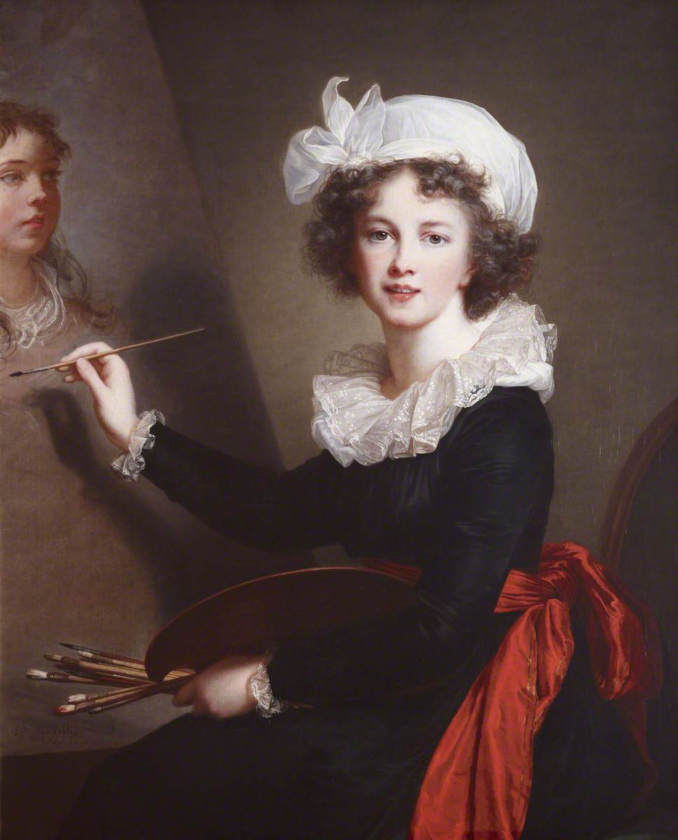 When we think of the French upper classes just before the French Revolution, what comes to mind are those impossible panniered gowns, powdered wigs, rouged cheeks, and ostrich feathers. Which is indeed what the aristocrats of the time were wearing, but the winds of change were already blowing, at least in fashion and social ideas. Thanks to Jean-Jacques Rousseau and other social thinkers, the need for less artifice in life started to penetrate the upper echelons of French society. Rousseau advocated being closer to nature and rearing one’s young in a different way than the cold turkey approach of keeping children in faraway nurseries and convents, and having newborns fed by country nursemaids.

Into this changing world of the second part of the 18th century came Elisabeth Vigée Le Brun (1755-1842), the talented daughter of a minor Parisian pastel artist who cherished his daughter’s gift and encouraged her painterly education. Though she had a precocious talent and ultimately lived as a friend to royalty all over Europe, she was repeatedly bowled over by circumstances beyond her control. Her mastery of the craft came in handy all too soon when her father died when she was only 12, leaving Elisabeth to earn money for her mother’s and younger brother’s upkeep. This was the first of many curveballs thrown by life’s circumstances, followed soon by another when her mother’s remarriage introduced a cruel stepfather who took all the money that the teenage painter earned.

Elisabeth overcame this obstacle as well, only to have her studio seized for practicing the painting craft without a license. At 19, as an established portraitist, she managed to get accepted to Académie de Saint-Luc— a guild that legitimized her work status. Two years later, in 1776, she also gained social respectability by marrying an art dealer, Jean-Baptiste-Pierre Le Brun; he gave her a name and a daughter but little else, since he turned out to be a gambler who lived off his wife’s growing earnings. They were estranged after a couple of years of marriage and divorced in absentia during the revolution 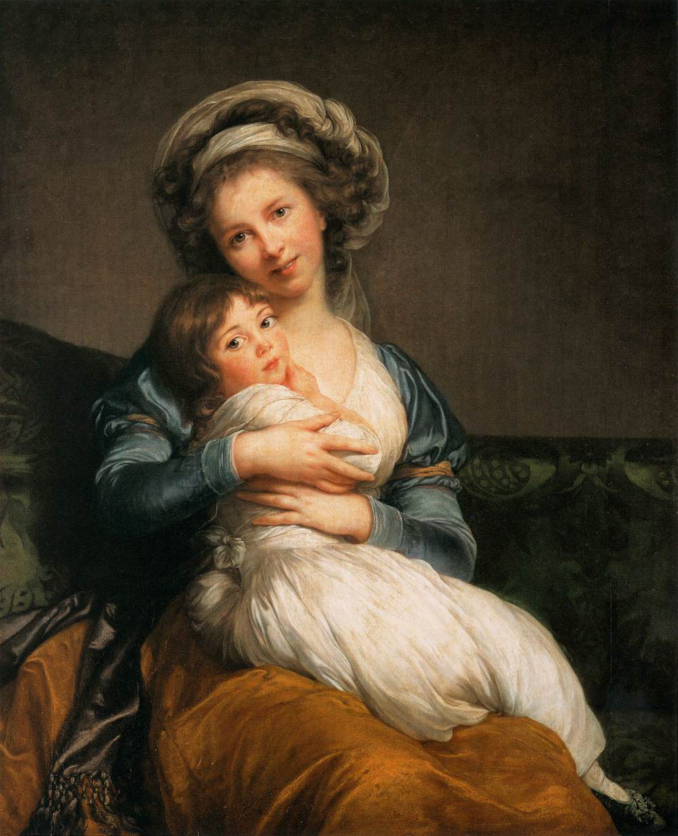 Elisabeth, very much influenced by Rousseau’s ideas, developed a close and loving relationship with her young daughter Julie. Only progressive women of her class would do this at the time; otherwise, children of nobility and the upper bourgeoisie would be sent off to a wet nurse at birth and then seen by their parents only at formal occasions. Above is a charming and clever portrait of Julie Le Brun when she was about five; the girl is not only exquisitely painted but also interestingly portrayed en face through the mirror and directly in profile. A self-portrait with Julie painted a year later caused a scandal when it was exhibited at the Salon of 1787. It featured the artist smiling and showing her teeth—a look acceptable perhaps in a genre painting but not in nobility portraiture. There is another equally famous and charming portrait of Elisabeth tenderly holding her child. This one is perhaps more conventional, except that this deliberate pose evokes Raphael’s The Cowper Madonna.

Elisabeth’s output was not limited to portraying her child. Professionally and socially, she was climbing. In 1781, she went on a journey to Holland and Flanders—places that were a painter’s paradise, full of works by Rembrandt, Rubens, and other masters of the Dutch Baroque. She saw there a famous
Portrait of Susanna Lunden, also known as A Straw Hat—a panel by Rubens that inspired her greatly. This image, together with the rising, Rousseau-inspired fashion for “country lifestyle” resulted in one of her most famous canvases, Self-Portrait in a Straw Hat. This was painted when the predominant, official portraiture style was to represent women in powdered wigs, corseted dresses, and pyramidal silk hats. This painting not only promoted a new “shepherdess” look but was also the artist’s commentary on the Rubens painting (which shows a woman in a hat that, despite its title, is actually made of fabric). “This is what a real straw hat looks like!” Elizabeth seems to say with her self-portrait. 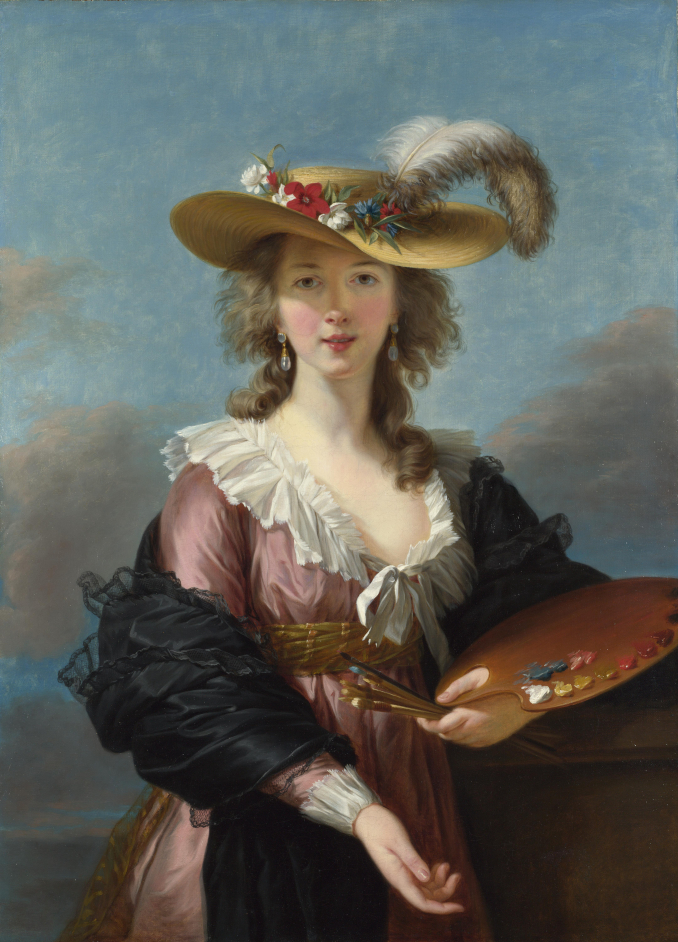 However, a few years after this formal, old-style portrait, both the sitter and the artist had moved on toward the new look of straw hats, free-flowing muslin dresses, and long hair freed from the powdered wigs. While Marie Antoinette had famously created a bucolic retreat around the Petit Trianon at Versailles, Elisabeth made her name and fortune painting aristocratic women dressed in diaphanous gauzes and straw hats covering wind-swept hair.

The original painting of Marie Antoinette in a Muslin Dress is housed in a German castle, but the Western public is probably more familiar with its copy in Washington, DC’s National Gallery. We know it was painted before 1783 because it was exhibited at the Paris Salon of that year, causing a great social stir.

For a few years, Elisabeth had everything—a royal patroness who helped her to get accepted into the Royal Academy, important commissions from noble patrons, a lovely daughter, and substantial earnings and prestige. Elisabeth painted 33 portraits of the queen and a dozen other important works. At the pinnacle of her career and influence, she had a golden life…until she didn’t. Life threw her another curveball, as her royal patroness lost her freedom (and eventually her head) and Paris was engulfed in the flames of the revolution. Elisabeth and her young daughter had to flee in disguise in a public coach with 80 gold coins—all that her husband would give her. 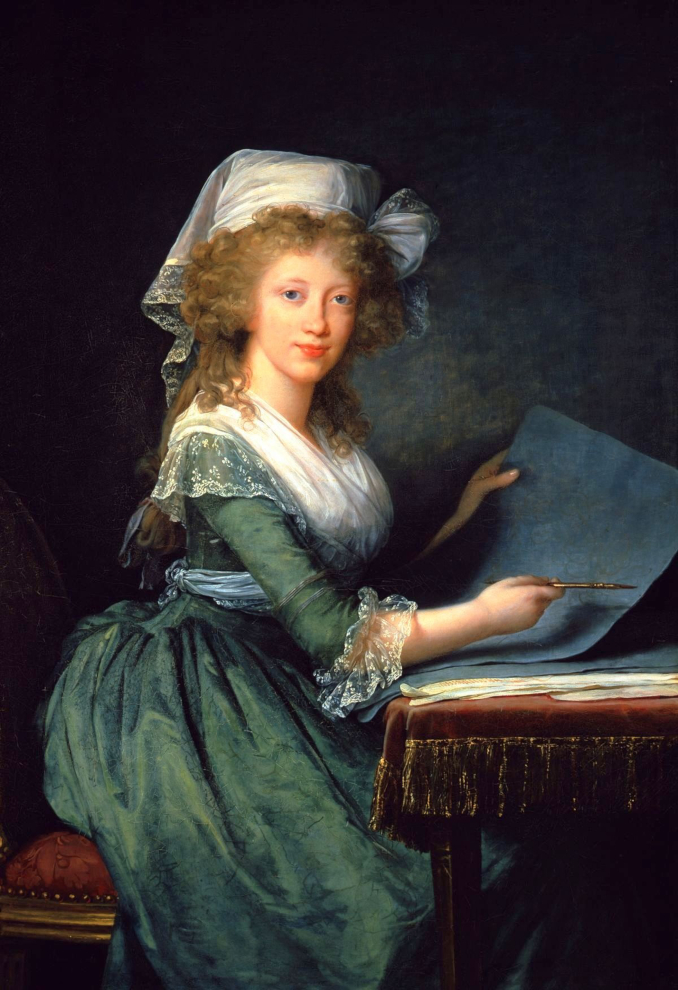 Elisabeth started a 12-year exile, with long stays in Italy, Austria, and Russia. The only thing the artist had to ease the hardship of her sudden emigration was her exceptional skill at painting. Here is an example of a painting she executed in Italy. According to Elisabeth’s memoirs, her model Maria Luisa, princess of Sicily, was “extremely ugly, and pulled such faces that I was most reluctant to finish her portrait.” We have other portraits of this much-painted princess with which to compare. Here is one, currently at l’Uffizi in Florence: 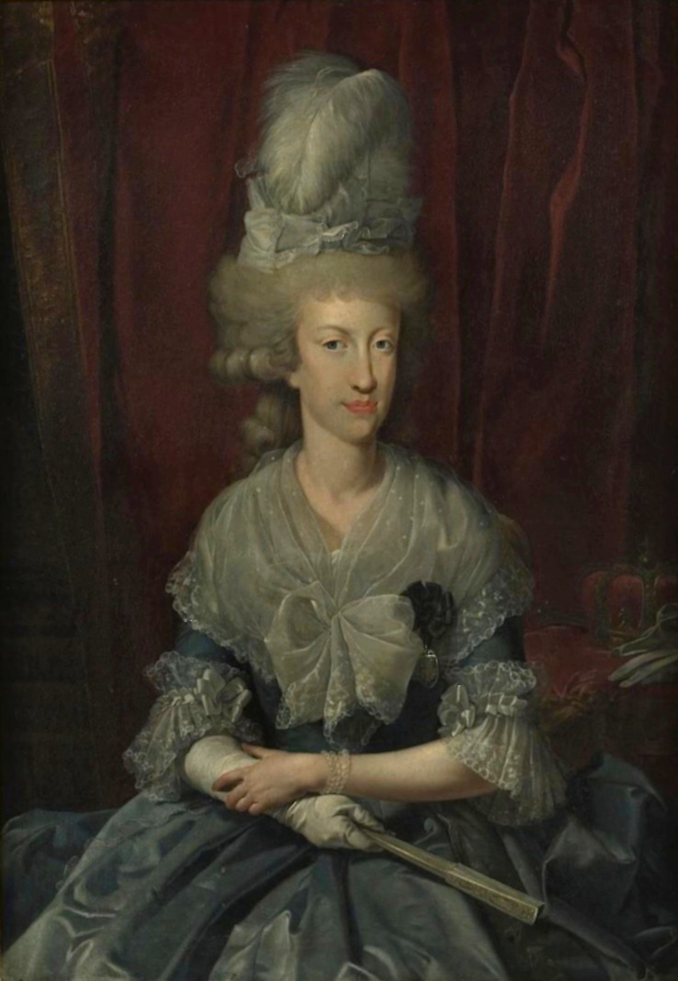 If we compare Filippo Lucci’s more naturalistic version with the flattering portrait by Elisabeth, it is clear why her romanticized, lively portraits were all the rage among her titled sitters. The long-faced princess Luisa looks—in Elisabeth’s portrait—like a pretty, sophisticated woman with some artistic talent to boot. Meanwhile, Elisabeth, who had more artistic talent than most, was still dependent on commissions and invitations to court. When an invitation came from Empress Catherine the Great of Russia, the artist packed up her brushes and her teenage daughter, and off they went through the snows of northern Europe. During her six years in Russia, she made many friends among Russian and Polish aristocrats and painted some of her most exquisite works.

Among Elisabeth’s Russian-period paintings, the most famous and most accomplished is her Portrait of Countess Golovina, but here are two that come from that period that are a bit less known. 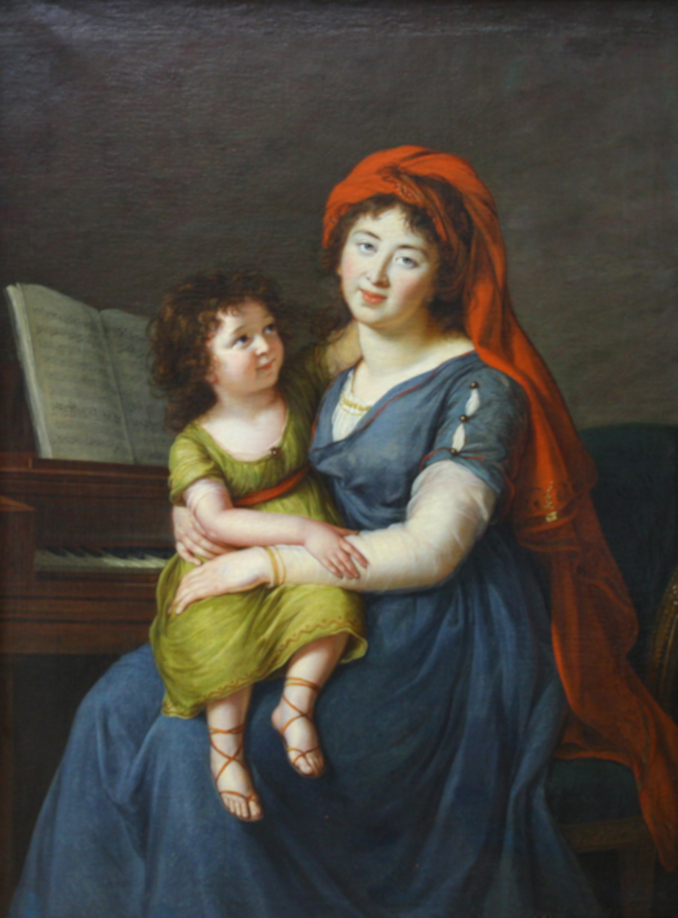 Princess Ekaterina Nikolaevna Mienshikova offers proof of Elisabeth’s unerring skill in making any woman look exceptionally beautiful and endowed with desirable qualities—here as a tender mother and cultured person. In real life, Princess Ekaterina must have had a fuller figure and perhaps she was not as musical as the sheet music indicates. But in this painting, she is a mother in a loving embrace with her cute little daughter while at the same time looking ethereal and romantic. Elisabeth knew how to make women feel good about themselves when looking at their portraits.

Although Elisabeth mostly painted women, her male portraits are some of the most accomplished ones of the era, even if they are less appreciated than those made by her male contemporaries (like Fragonard or David). In St. Petersburg, she befriended another exile who for years tried to buy a painting of hers but failed due to the high price (he bought a miniature by Angelica Kauffmann instead). This fan of Elisabeth was the last king of Poland, Stanislaw August Poniatowski. In 1779, the king had just been released by the Russian emperor Paul I from a two-year home exile near Grodno (today’s Belarus) and was forced to live in St. Petersburg under strict supervision (even though the king himself was hoping to retire to Rome). He was at the end of his royal ambitions (he was first put on the throne and then forced to abdicate by Catherine the Great). The exiled ex-king and Elisabeth became close friends, meeting in the third year of Elizabeth’s Russian exile at social events (such as Princess Kurakina’s birthday party, where Elisabeth organized and performed in live pictures, a typical home entertainment of the era). Elisabeth painted two of his portraits—the more known one is the one in an ermine cloak—memorializing a regal look and stance that would remind the world that he was once a king of Poland before both he and the country lost their independence.

Unfortunately, during the Russian years, Elizabeth also experienced a disastrous falling out with her beloved Julie. As any mother of a teenage daughter can attest, the moment when a girl starts looking at boys is not the easiest one in mother-daughter relationships. Twenty-year-old Julie, spoiled and coddled by her mother, set her eyes on a ne’er-do-well, Gaétan-Bernard Nigris, a secretary at the imperial court. After many fights, Elisabeth relented, obtained a marriage permission from her ex-husband (mothers had zero power in those days), and threw Julie a sumptuous wedding. Two weeks later, her stubborn daughter was in tears since the marriage was over. Julie’s disastrous marriage carved an irreparable rift between Elisabeth and her child.

After six years of Russian winters, Elisabeth was done with that part of the world. She was able to return to France to restart her life again. Although she lost her Academy membership—because revolutionary France abolished this right for women (presumably as part of revolutionary social progress)—Elisabeth was slowly able to pick up commissions. Julie came back to France, too, but she remained estranged from her mother, lived in poverty, had a string of bad relationships, contracted either TB or syphilis or perhaps both (there aren’t enough records), and only reconciled with her mother on her deathbed. Elisabeth, meanwhile, outlived her daughter, her ex-husband, her younger brother, and most of her friends and confidantes. Over her lifetime, she witnessed several monarchies (Louis XVI, Bonaparte, Charles X, Louis Philippe I) and the rise and fall of the Revolution and was a friend of royals, artists, writers, and politicians (Voltaire, Talleyrand, Franklin, Lafayette). Elisabeth Vigée Le Brun died at the age of 86, well into the 19th century, a symbol of old monarchies and new post-Rococo portraiture, leaving behind 600 works.