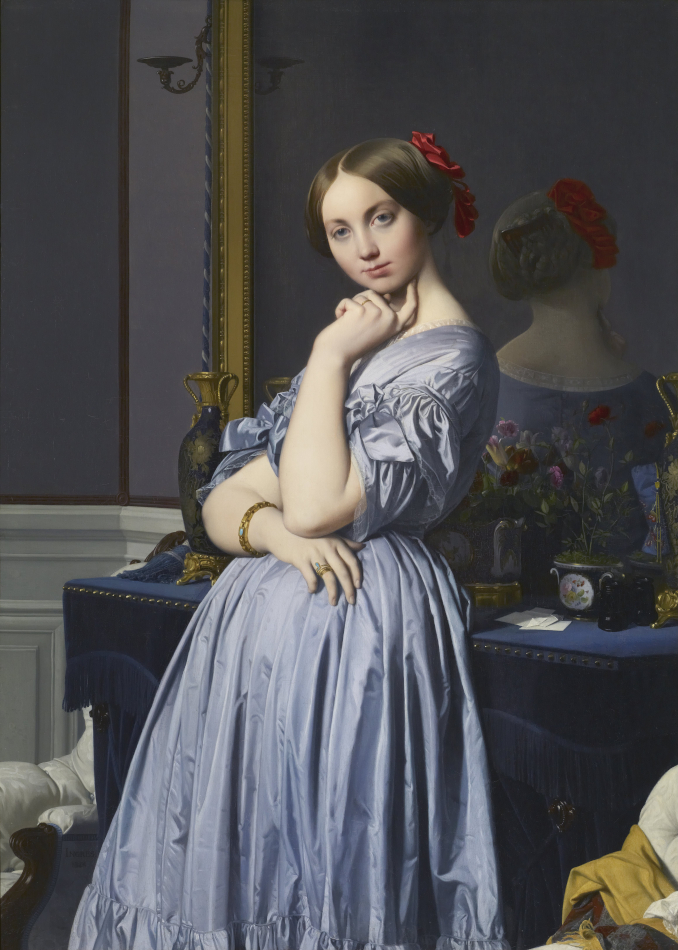 So many people love the experience of visiting New York. I don’t. I’m overwhelmed by the stone jungle of office towers and the incessant noise of construction, police sirens, honking cars, and roars of unidentified machines. There is one thing, however, that attracts me to Manhattan like a bee to honey—its abundance of the most exquisite museums of fine art. I’ve just made a pilgrimage to New York’s Big Five: The Met, the Museum of Modern Art (MoMA), the Guggenheim, the Frick Collection, and the Whitney, now fully reopened for visitors hungry for art after pandemic closures. It’s like visiting familiar places and old friends, except that here, the places and people can be found on canvas. These temples of art are too large to see everything (I have tried), so you have to choose favorites from whatever is currently on display. 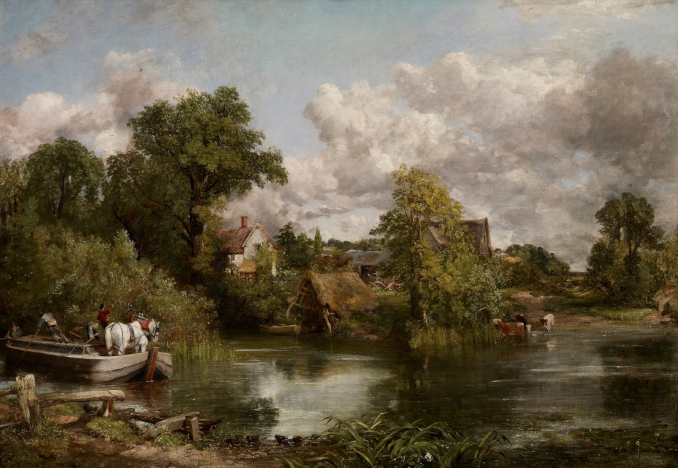 I started with the Frick. The original Frick Collection was established in 1935 as a bequest of industrialist Henry Clay Frick, whose stately mansion was built with that purpose in mind. However, the grand wood-paneled, marble-and-stone-clad structure is undergoing renovations for the next two years. The Frick Collection’s temporary location in the 1960s Breuer landmark (the building originally designed to house the Whitney Museum of American Art) allows for a selection of the Frick’s greatest treasures of pre-modern art to be presented in a new light. Renamed the Frick Madison, the three floors of basically empty gray spaces provide a completely different context for the collection, which was traditionally displayed in its period cocoon of wood parquets, mirrors, marble tiles, thick carpets, and period furniture. The temporary display of paintings and porcelain against gray walls draws the viewer’s attention back to the actual artworks without any decorative distractions—and this austere, contemporary surrounding for famous artworks feels invigorating.

Like any personal art collection that seeded a smaller museum (examples include the Phillips Collection in Washington, the Wallace Collection in London, and the Norton Simon Museum in Pasadena, to name a few), the Frick Collection is already an edit of the best and the most famous. Here I am just highlighting a few examples on each of the Frick Madison’s three floors. 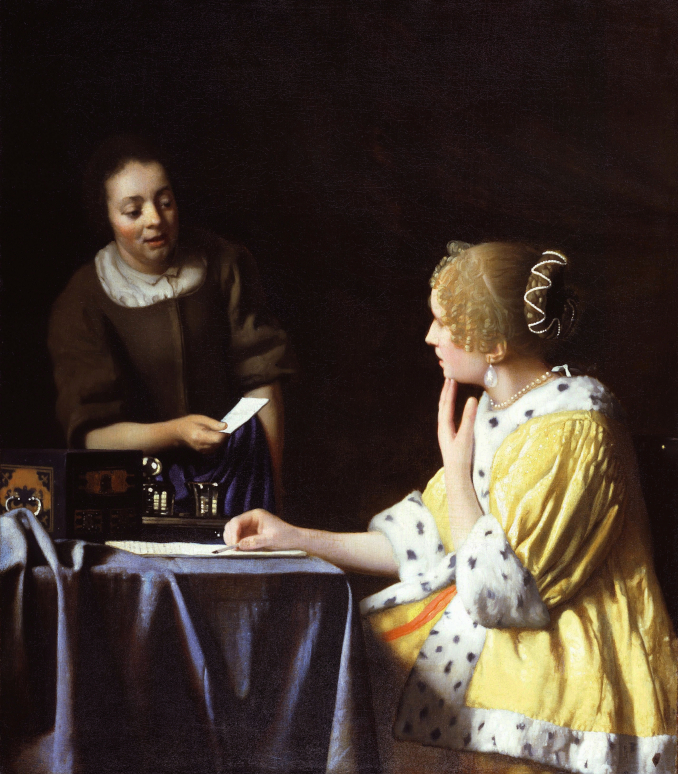 The second floor is devoted to the Dutch and English old masters. Out of the 34 recognized Vermeer paintings in existence, the Frick has three. Two are lovely-but-typical Vermeer genre scenes, but the third is superb. For one thing, The Mistress and the Maid canvas is larger than Vermeer’s typical pictures. It is also a night scene instead of his usual daytime setting of people in front of a window on the left. The table is not covered with a red Persian rug (as in many other paintings), but instead with a rich blue velvet cover that provides a color counterpoint to the lemon-yellow cloak of the mistress who pensively touches her chin. The same ermine-trimmed cloak appears in other Vermeer paintings (see The Love Letter, Woman with a Pearl Necklace, A Lady Writing, and The Guitar Player), and we recognize the pearl from the most famous of them all—The Girl with the Pearl Earring. So, these are familiar props, but, presented in a night setting, they serve to tell a tale of mystery. What is the mistress discussing with her maid? A love letter she is writing? An unexpected message? We will never know, but this precise, clean-lined composition is like a still from a film—a mysterious moment captured in an image.

The Mistress and the Maid was the last painting acquired by Frick for his collection. He obtained it from a Berlin collector who found himself on the losing side at the end of WWI. Frick passed away on December 2, 1919, four months after the painting arrived in New York. 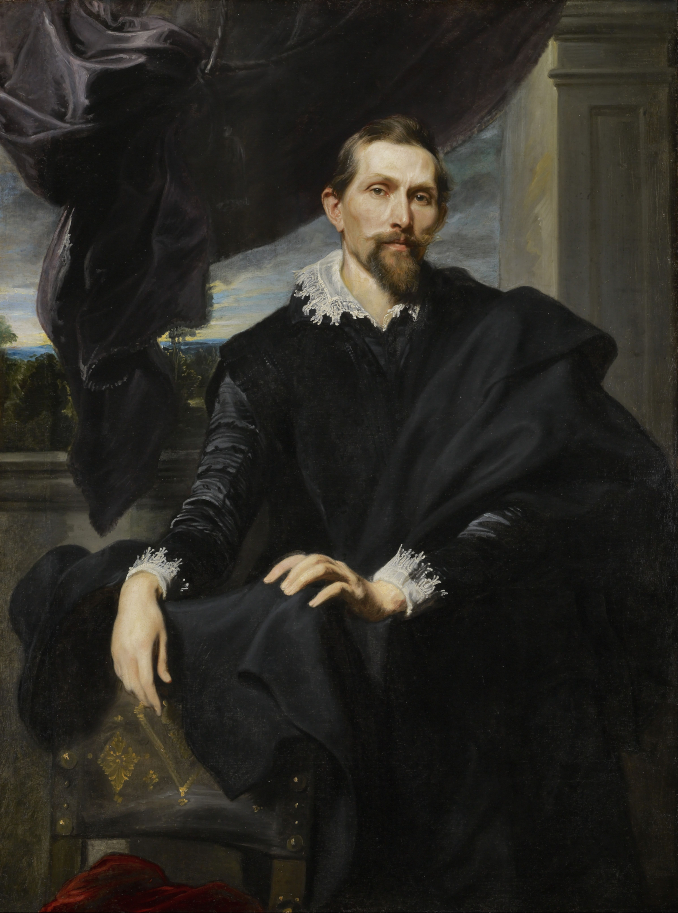 The museum has eight paintings by Anthony van Dyck, all of them now displayed in the same room and ranging from a bit mundane (like the portrait of Sir John Suckling, whose spaniel-like countenance could not be improved even by a master) to the sublime psychological Portrait of Frans Snyders. Twenty-year-old van Dyck painted fellow artist Snyders—a sought-after painter of genre scenes and still lifes—as well as, in a companion portrait, Snyders’ wife Margareta de Vos. Snyders was prosperous, and van Dyck most likely painted the couple on the occasion of their purchase of a large house in Antwerp. The two portraits were separated in different collections for centuries until Frick acquired both and reunited them. While the image of Margareta is more conventional—she is just stiffly posing for a picture—the portrait of Snyders is that of a person come alive. He assumes a relaxed pose with one hand draped over a chair back, and he looks directly at you with an intelligent and inquisitive gaze. Van Dyck collaborated with Snyders on several paintings, so he must have known his sitter’s mind quite well.

The same second floor of the Frick Madison displays its three Rembrandt pictures, including the famous and somewhat enigmatic The Polish Rider. For the approximately 150 years that this painting was housed in Polish aristocratic collections (including that of the last Polish king), it was called Lisowczyk. A “Lisowczyk” was a soldier from the Polish light cavalry. Known for their bravery but also their savagery, these fierce mercenary fighters, dressed in characteristic riding clothes and fur hats, became famous in the Low Countries during the Thirty Years’ War (1618-1648). Rembrandt was always fascinated by unusual costumes, and he may have simply used this Polish cavalry costume—especially the fur hat and an overcoat called a żupan—to make his picture more exotic. However, pre-eminent Polish art historian Jan Białostocki theorized that "Polish Rider" could have been referring to Jonas Szlichtyng, a leader of a Protestant sect of Arians also known as the Polish Brothers. In his writings, Szlichtyng used the Latin pseudonym of Eques Polonus (Polish Rider). The debate over this painting’s meaning, its sitter, and his national origin has never really been solved, but it seems that Rembrandt may have been evoking some Polish connection. (After all, his sister-in-law was married to a Pole, and he painted Portrait of Polish Nobleman in 1637.)

The last Polish owner of this canvas, count Zdzisław Tarnowski, sold it to Frick in 1910, whereupon the painting’s Lisowczyk title and its Polish connections receded into the fog of history. Regardless of its still-debated genesis, this remains one the old master’s best-loved canvases. The format is unusual (larger than a portrait, smaller than typical horse rider portraits), and after some bad 19th-century restoration, it is almost square in size. There is definitely some mystery or perhaps melancholy in this image. The young rider is caught in a trot through an empty landscape, the horse is emaciated, and despite the warrior’s accoutrements (a bunch of arrows in a quiver, a saber), he seems to be more posing than riding into battle. 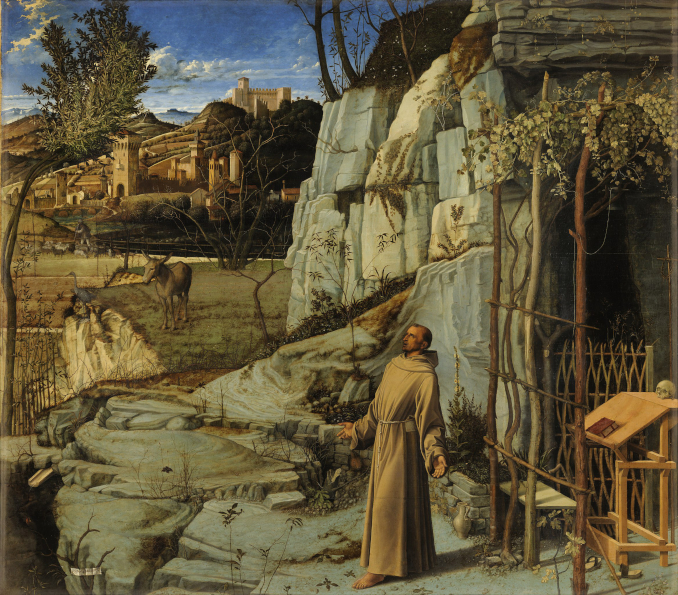 The Frick Madison’s third floor is devoted to Spanish and Italian art, and it is hard to choose favorites among so many famous masterpieces. There is, for example, a detailed and clever oil panel by Giovanni Bellini, St. Francis in the Desert, that has been studied for centuries since its creation in about 1480. Scholars have enumerated the medicinal plants and religious symbols in this picture, but already in the 16th century, the painting was also praised for "landscape wonderfully composed and detailed." And it remains so; though this beautiful landscape does indeed feature the central figure of a saint in ecstasy, it is the panorama of rock layers, distant hills, castle buildings, and a dramatic blue sky that makes this picture such a delight to study.

Other old masters are also well represented on this floor, including one of El Greco’s versions of The Purification of the Temple (out of the five versions that he painted over 20 years, the best one is here); Velázquez’s military portrait of his patron, King Philip IV of Spain (you need to stand at a respectable distance of six feet away to appreciate it); and Goya’s dramatic The Forge. 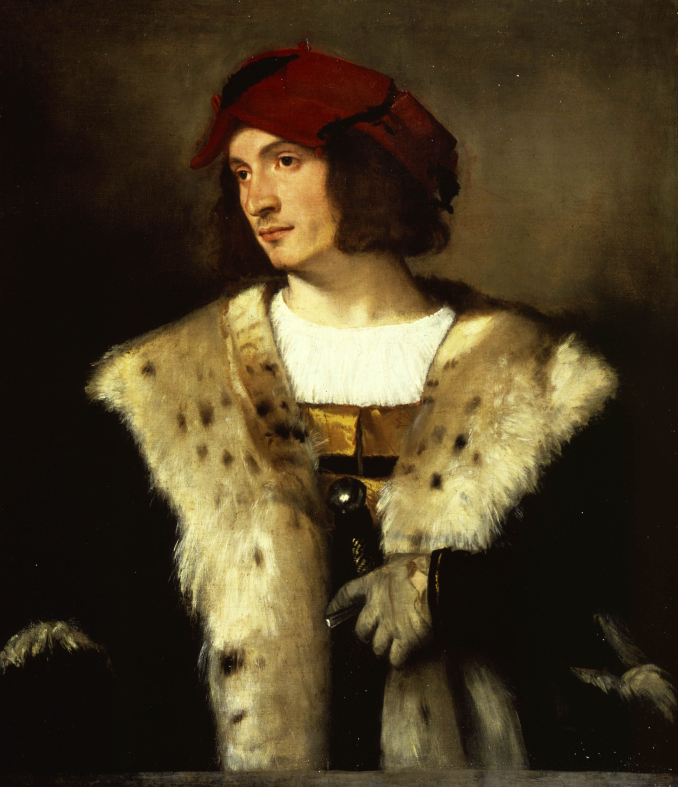 The one that I like the most on this floor is Titian’s Portrait of Man in a Red Cap from 1516 (note that Wikimedia lists the wrong date for some reason). This is the year when Titian succeeded Giovanni Bellini as an official painter for the Venetian state and was on the cusp of the greatest achievements of his long, productive career. But this virtuoso portrait belongs to an earlier period, when Titian was happy to use the new technique of oil paints (that started to replace tempera) and to experiment with vivid colors. This is very evident in the crimson red of his sitter’s hat, the gold of the silk flap, and the shimmer of lynx fur. This is a portrait of a man in his twenties (that is, Titian’s peer)—an elegant Venetian noble who duly poses for a formal portrait but who seems to be more concerned with some troubling thoughts (romantic love? daydreaming? personal problems?). The masterly ability to render textures and fabrics serves here only as a background to the depth of expression on the man’s face. Together with A Man with a Quilted Sleeve, this early Titian portrait (or its copies and engravings) was admired by Rembrandt, Rubens, and Caravaggio, influencing each generation of painters afterwards.

The fourth floor of the Frick Madison is an arrangement of the Frick’s French and English art, and it is hard to choose between Fragonard, Constable, Turner, Whistler, Gainsborough, Reynolds, Manet, and others. That floor also houses a collection of bold women’s portraits. There is the iconic poster lady for the Frick Collection in Ingres’s Comtesse d’Haussonville, Whistler’s commissioned Portrait of Mrs. Frances Leyland (aka Symphony in Flesh Color and Pink), and Thomas Lawrence’s tour de force: Julia, Lady Peel.

Julia’s husband Lord Peel was Lawrence’s patron and Britain’s Prime Minister. He was also an owner of Rubens’s famous portrait called Le Chapeau de Paille, which Peel acquired just a few years before he commissioned Lawrence to paint his wife. By all accounts, the Peels were a loving couple—something of a rarity in 19th-century England where aristocratic marriages were usually arranged and maintained for dynastic and financial reasons.

Julia, Lady Peel is Lawrence’s artistic dialogue with Ruben’s portrait and a brilliant showcase of his elegant but freewheeling brushwork. The enormous, red-dyed feathers create a dramatic background for Julia’s lively face, while the various creams of the silk dress and down lining create a backdrop for her impressive jewelry. There is an alluring contrast between the flamboyant costume—the erupting red feathers, the glitter of heavy gold bracelets—and the serene expression on Julia’s face. Already in 1827 when this portrait was completed, critics hailed it as Lawrence’s greatest achievement and one of the most accomplished portraits ever made. The portrait has never ceased to be a star of any show, and it is the highlight of the portraiture collection at the Frick, easily competing with other equally celebrated canvases.

I have barely scratched the surface of the Frick’s treasure trove. The temporary modern setting at the Frick Madison location brings the focus on the artistry, which perhaps will disappear once the celebrated artworks return to their plush historic settings. For some reason, the Frick Madison is the only New York museum (and one of very few in the world) where viewers cannot take personal snapshots of the art. This makes it difficult to retain in memory one’s favorite paintings. So…this is the very short list of my favorites…as I remember them from my few hours of wandering around the Frick.