Tenet was supposed to be a Warner Bros. blockbuster for one of the hot mid-July weekends you might spend in a shopping mall cooling off. Summer is the best season for action movies in the U.S. Instead, this release ended up being the film industry’s canary in a coal mine. By the end of May, 2020, the world was in a coronavirus lockdown, and movie theaters were shut. The studio moved the release date several times, finally making a ground-breaking decision to release overseas first. Never before has a major Hollywood studio opened a tentpole film abroad, weeks ahead of the U.S. debut.

The gutsy (and sensible) release strategy has paid off. To date, Tenet has made over $280 million in overseas markets, and at the time of this writing, it had begun slowly rolling out in selected U.S. markets. The film industry has been anxiously watching Tenet’s slow launch in the U.S., trying to test the waters of viewers’ eagerness to come back to theaters. The jury is still out, which is a shame considering that this is one of the most anticipated and accomplished movies of the year.

The reason Tenet has been subject to such a careful release strategy is that this is not a run-of-the mill movie. It is directed as a huge entertainment piece by one of the most bankable and venerated directors in Hollywood. Ever since he made his first Batman movie in 2005 (he directed three altogether), Christopher Nolan has attracted both critical acclaim and a legion of fans who admire his elegant visual style, non-linear timelines, trademark shots, gravity-defying special effects (remember folding houses in Inception?), numerical trivia, and psychologically complicated characters. Ordinarily, movies directed by star filmmakers like Nolan would not be released like arthouse films—slowly rolling out in distant markets before being shown in major U.S. cities—but coronavirus has changed all that, upending the marketing strategies of decades past.

Nolan is a great supporter of the big-screen experience, and he famously favors theatrical releases over streaming. It is ironic, then, that it is his long-awaited, visual-fest firework that has ended up being the movie on the forefront of Hollywood’s new strategy for releasing films—and ironic that it is having a hard time accessing live audiences. Reports have it that when Tenet finally made its way out into the world (rolling out internationally on August 26 and domestically on September 3 in selected markets), there were fans who literally traveled to distant locations to see the movie. And it is indeed worth seeing.

For decades, filmgoers worldwide have been fed a steady diet of action movies, replete with gun fights, car chases, and explosions. It is very hard to say something new in terms of visuals, plot, or staging when so many talented filmmakers have already come up with so many variations on the theme. Yet Nolan does exactly that—says new things in terms of style and content by creating worlds where time gets slowed down, dreams can be visited, space can be stretched or bent, and all the while the audience is trying to figure out if he is showing them a “dream” or “reality.” At the same time, Nolan’s movies can easily match the Mission Impossible franchise in terms of action staging. In Tenet, there is a car chase scene with a stunt design that is exciting in itself, but the director also throws in cars that move backward in time to really mess with our expectation of what is possible and what isn’t. And then he stages a plane crash—except that it is a huge 747, and the crash involves tons of gold bars, time reversal, and an impregnable art storage facility with lethal gas—and this is just the set-up and not the action itself. As a viewer, you feel like a customer being served a gourmet three-course dinner with tiramisu at the end.

One thing that a Nolan audience should not ask for is a straightforward synopsis of what they are seeing. Not only is Tenet’s narrative complicated—a combination of a spy plot, a rescue mission, and a race to stop a worldwide implosion—but the movie can probably be watched from beginning to end or from the end to the beginning and still work as a story. From his first Hollywood movie, Memento, Nolan has been exploring ideas about time, notions of reality versus dreams, and intellectual paradoxes that result from thinking about these ideas. Time paradoxes have been a source of intellectual fun not just in film but in fantasy literature ever since Einstein came up with the theory of special relativity in 1905. As early as 1941, Jorge Luis Borges explored parallel timelines in his short story, “The Garden of Forking Paths.” Even the kid’s classic, Harry Potter and the Prisoner of Azkaban (Book 3 in JK Rowling’s series), features the danger of meeting oneself from the future.

In Tenet, however, Nolan wants to go beyond the old paradox of “if you go back in time and kill your grandfather, will you be ever born?” He wants to do to time what he did to space in Inception and Interstellar—that is, bend it, mold it, and squeeze it. In Inception and Interstellar he played with space, showing us streets and sports fields that bent onto themselves. In Tenet, we get time that inverses. The whole movie is about reversing, starting with the title that is a palindrome and ending with a plot that rolls into itself like an ouroboros snake.

It is hard to describe the plot of a movie like Tenet, not only because it is easy to spoil it (throughout the story there are revelations to make us reassess all the previous information), but also because the plot evolves in parallel tracks of two different “present times,” or sometimes of the future coming back or maybe even the past showing up in the present. In addition, while Nolan takes visual toys from popular culture—exciting car chases, spectacular explosions, complicated gunfights—he places them in an intellectual context that would delight a physicist or philosopher.

Nolan fans enjoy following his trademarks—dream sequences, recurring shots, name and number clues—and tracing them in each of his movies. For general audiences, the fun will be perhaps in both watching his Bond-standard action set pieces and in figuring out the ideas about time that underlie all these spectacular stunts. Cinematically, Nolan’s style is a blend of Imax-size cinematography, major stunts (he is famously and unusually averse to computer graphics in favor of real stunts or models), and mind-bending visual concepts (a gravity-free hotel fight in Inception is a perfect example). 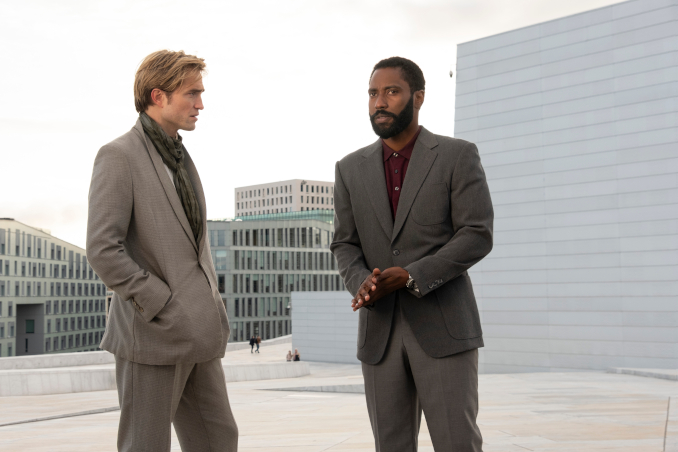 The story has a Protagonist with a capital “P” not just because this is the character’s name but because he is the central character and a spiritus movens of everything that happens or will happen in the world. The Protagonist (John David Washington) is a seasoned special ops agent who, after helping to foil a terrorist attack at the Kiev Opera house, gets recruited by a mysterious organization called Tenet. His task is to retrieve a time-reversing technology that is in the hands of a rogue Russian billionaire named Andrei Sator (Kenneth Branagh). The technology comes from a future in which the entire world comes to an end. The Protagonist enlists the help of a man called Neil (Robert Pattinson), who knows how to attack an impenetrable warehouse for millionaires but also how to maneuver back and forth between times—the one going forward and the one that can go backward. The Protagonist juggles several tasks at the same time—trying to retrieve some plutonium as a payment to Sator, trying to prevent the oligarch from killing his wife Kat (Elizabeth Debicki), and trying to save the world from total entropy that would annihilate everything. And this is just in the first hour of the movie.

If this all sounds too complicated, you can just admire Nolan’s dexterity in weaving non-stop action together with different timelines while narrating a gripping story. One of the more spectacular scenes—an attack on an abandoned city—involves Sator’s villains pitted against two Tenet teams, except that one of them goes forward in time and the other one backward, while The Protagonist and Neil weave in and out of both. This is like watching Einstein’s theory of special relativity… except that is in widescreen and in a modern warfare setting.

Most big-budget action movies are rich in special effects and starved of any intellectual content. With Nolan, you get both, regardless of whether it is a dream fantasy like Inception, a comic book story like in his Batman series, or the hard-hitting true war events of Dunkirk.

Tenet is still only playing in selected cinemas in the U.S. (for example, theaters in Los Angeles and New York—some of the largest American entertainment markets—are still closed). Due to pandemic closures, the movie may never reach its anticipated box office potential. Unlike the majority of releases though, this new cinematic insight into Nolan’s creative obsessions about the nature of time and space is worth seeing several times, both for the entertainment factor and out of intellectual curiosity to witness how the director’s blocks of imagination fit together.